On the Coffee Table: Krishnendu Ray

Title: The Ethnic Restaurateur
Author: Krishnendu Ray
Krishnendu Ray, an Indian-born professor of Food Studies at NYU, presents an exploration of the American restaurant industry and the role of the the non-Anglo, non-white, typically foreign-born business owner within that industry.  "Ethnic restaurants" cover a broad range.  What might have been considered foreign in the 19th century - German food, for instance - has been so thoroughly absorbed into the mainstream as to be indistinguishable from its roots.  What might be considered relatively exotic to the middle-class white consumer - soul food, for example - isn't remotely foreign-born.  Most of what Ray examines, however, from the 21st century perspective are the cuisines of Asia, Africa and Latin America which, despite various levels of popularity, still remain at the periphery of the culinary profession.
The book is fascinating, more academic in language and approach than I usually tackle but beautifully written and accessible nonetheless.  Ray's study reveals a great deal about white America's patronizing attitude towards the other.  The author moves beyond the ground-level business experience of the restaurant owner to the world of the professional chef, most intimately the training at the Culinary Institute of America (CIA) where anything beyond the traditional French techniques struggle to gain a foothold.  Ray draws a sharp line between the pro and the ethnic chef, defined by wildly different career paths.
I now see the restaurant experience - any restaurant experience - differently.  Who is the chef and how is s/he trying to reach me as the more or less typical white American diner?  A fusion menu projects a different signal than one I (probably mistakenly) perceive as more culturally authentic.  How much of my reaction to the food is shaped by the desire for something new?  How much is it shaped by what I expect, especially from a culture - Thailand, let's say - with which I have no direct personal experience?
Reasonably if predictably, Ray questions the very authenticity we perceive.  What passes for Indian cuisine in the United States, for instance, typically represents only a narrow band of the broad cultural diversity of India.  In truth, all cuisine, even the holiest of holy French cuisine, is regional, not national.  But as a typical white diner, I know what I expect from the Chicken Tikka Masala I order in London and will be deeply disappointed if I don't get it, regardless of whether or not the dish reflects anything I could actually eat in India.
So yes, I recommend the book.  It will change the way you look at the industry and perhaps how you look at American society in general.  For the better.
Posted by The Armchair Squid at 1:00 AM No comments: 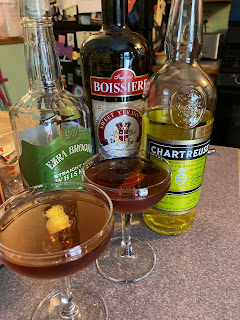 A Greenpoint combines rye, yellow Chartreuse, sweet vermouth, Angostura and orange bitters with a lemon twist.  I got the recipe from The Joy of Mixology by Gary Regan, another of his Manhattan derivatives.  Regan, in turn, got it from Michael McIlroy of Attaboy in New York.  Greenpoint is the northernmost neighborhood in Brooklyn.
This one was an instant fail for my wife.  She scrunched up her nose and reported, "Ugh, it tastes like cough syrup."  I was not so turned off but Regan would concede, the customer is always right.  You just never know what you're going to get with Chartreuse, a magical and mysterious liqueur.  I would have thought given the ingredients, this would be a winner - and I still wonder if it might be with green Chartreuse rather than yellow - but alas, no.
Posted by The Armchair Squid at 1:00 AM 2 comments:

Episode: "Liaisons"
Series: Star Trek: The Next Generation
Season 7, Episode 2
Original Air Date: September 27, 1993
The Enterprise crew is engaging in a cultural exchange with the Iyaarans.  Two ambassadors are visiting the ship while Captain Picard departs for a visit to their home world of Iyar.  En route, his shuttle crashes on a desolate planet where he discovers the survivor of a previous crash, a beautiful woman named Anna.  She has been stranded for seven years.  While Picard works to rescue them both, Anna professes her love for him.
Meanwhile, back on the Enterprise, one of the ambassadors, Loquel, falls in love with desserts, first to the delight but eventually the exhaustion of his liaison, Counselor Troi.  The other, Byleth, seems to delight in making his own liaison, Lieutenant Worf, miserable.
The primary Picard narrative was originally inspired by Stephen King's Misery though, fortunately for our captain, his own adventure is less gruesome.  It's still a dark tale by Trek standards, nicely offset by the frequently humorous secondary narrative playing out on the ship.  An interesting side note: the props department had to make some changes to Loquel's sweet treats.  The actor, Paul Eiding, is allergic to chocolate.
Acting Notes
Barbara Williams (Anna) was born October 19, 1953 in Vancouver Island, Canada.  Film credits include Thief of Hearts, Watchers, Oh, What a Night and Love Come Down, for which she was nominated for a Genie Award.  She has been married twice, first to actor Nick Mancuso, second to activist Tom Hayden for 23 years until his death.
Posted by The Armchair Squid at 1:00 AM No comments: 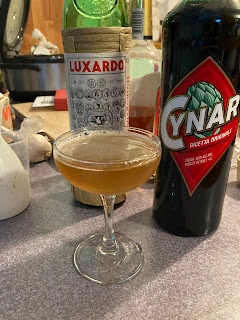 A Bensonhurst combines rye, dry vermouth, maraschino liqueur and Cynar.  It is a Manhattan variant created by bartender Chad Solomon of Cuffs and Buttons.  I got the recipe from a new book to my personal library: The Joy of Mixology: The Consummate Guide to the Bartender's Craft by Gary Regan.  Bensonhurst is a neighborhood in Brooklyn.
My copy of The Joy of Mixology is the second edition of a book first published in 2003, one that has quickly become a must-have for cocktail enthusiasts.  Regan's target audience is the professional bartender but his book is filled with basic tips anyone can use.  It's also highly readable.  I don't intend to read it cover to cover but one could.  There are chapters on history, theory, technique and meaningful blurbs on the individual recipes, too.  As it is aimed for the pro, the emphasis is on pleasing the customer.  A lot of books (by food writers who are not professional bartenders) are rather pedantic - precision is paramount.  Regan is more flexible and forgiving.  I appreciate that.  Regan has fun charts detailing how drinks are related to each other.  I got the Bensonhurst from a list of cocktails that descend from the Manhattan, our house favorite.
As for the drink itself, my wife found it slightly too bitter.  I picked up more of the maraschino flavor.  I had to add a tiny bit of cherry brandy - 1/2 tsp - as we didn't have quite enough Luxardo.  The Bensonhurst is pleasant enough, though certainly no threat to my standard Manhattan recipe.
Posted by The Armchair Squid at 1:00 AM 2 comments:

Episode: "The Homecoming"
Series: Star Trek: Deep Space Nine
Season 2, Episode 1
Original Air Date: September 26, 1993
Kira learns that Li Nalas, a hero of the Bajoran Resistance, is alive and being held prisoner in a Cardassian labor camp.  She and Miles rescue him.  She and Commander Sisko both see Li as a potential symbolic leader for a politically fragmented Bajor.  Unfortunately, Li himself isn't so keen on the job.
At the end of DS9's first season, co-creator Michael Piller instructed the writers to concentrate on stories that would break away from NextGen.  "The Homecoming" is the first of a three-part story, one that focuses on the politics of Bajor.  It ends with a good cliffhanger as Jaro, a Bajoran minister played by the un-credited Frank Nagella, tells Sisko that Li will be replacing Kira as the station's liaison officer.
Acting Notes
Marc Alaimo played the role of Gul Dukat, one of DS9's most important recurring, and nuanced, recurring characters.  "The Homecoming" is Alaimo's third of 33 appearances as Dukat, though he also had four TNG appearances as four different characters.  Alaimo, was, in fact, the first Cardassian in the franchise - Gul Macet - and the species's makeup design was inspired by the actor's distinctive neck muscles.
Alaimo was born May 5, 1942 in Milwaukee, Wisconsin.  He had an active stage career in both Milwaukee and New York before moving to Los Angeles in 1973.  His television credits are extensive, including guest roles on Kojak, Gunsmoke, The Greatest American Hero, Hill Street Blues and The A-Team.  Films include Naked Gun 33+1/3: The Final Insult, Tango & Cash and The Dead Pool.
Posted by The Armchair Squid at 1:00 AM 2 comments:

Manchester, Vermont has been a resort town since the Civil War, drawing from New York, Boston and everywhere in between year-round.  Most of the people one sees wandering the strip malls are not local residents of the town of under 5,000.  We have met up with Wild Turkey, Commish and family (read here) in Manchester a few times over the years during their summer travels, specifically at Bob's Diner for lunch.  It also made for a convenient stop on one of our recent trips to Massachusetts.
Bob's feels timeless but not old.  The place looks like nearly any 1950s decor diner with the menu you'd expect but doesn't feel run down in the slightest.  One senses it's a popular spot for both locals and the many tourists.  There wasn't a whole lot of snow in Vermont in early January nor was it even especially cold, but that didn't seem to deter the crowds.  I suppose you have to make your reservations at the resorts well in advance so you might as well go, skiing or no skiing.  A lot of the clientele looked about college age - probably got bored hanging out at home with their parents over break. 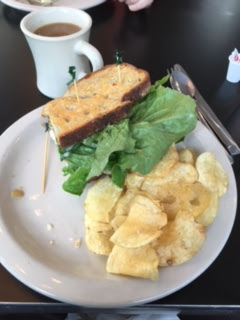 I got the Diner's Club with turkey.  It was good, though I was disappointed by the lack of a pickle, promised in the menu.  Service was friendly, if a little slow.
Posted by The Armchair Squid at 1:00 AM 2 comments:

Episode: "Descent, Part II"
Series: Star Trek: The Next Generation
Season 7, Episode 1
Original Air Date: September 20, 1993
Season 6's season finale continues.  Data, drunk with his new emotions, has joined forces with Lore, his evil brother.  Lore has enlisted a group of disgruntled Borg drones to help him realize his own megalomaniacal vision.  As we join the story, Picard, Troi and La Forge are Lore's prisoners.
The writers themselves admitted that they took on too much story in "Part I" to do it all justice in "Part II."  By my reckoning, it's too much Lore, not enough Hugh, though the latter does play a pivotal role.  I am glad Lore is finally killed off in this episode.  I really can't stand him - too much "Look at me!  I'm evil!" acting from Brent Spiner.
Acting Notes
Alex Datcher played the role of Ensign Taitt in a forgettable (not her fault) secondary narrative on the Enterprise bridge.  Datcher was born June 6, 1962 in Chicago.
Datcher was a regular on Goode Behavior and had a recurring role on 18 Wheels of Justice.  She also made guest appearances on Beauty and the Beast, Sliders and The Pretender among others.  Films include Rage and Honor, Passenger 57 and Jury Duty.
Posted by The Armchair Squid at 1:00 AM No comments: