Worf leads an away team to investigate a planet once inhabited by Koinonians.  A long abandoned explosive detonates and Marla Aster, a member of the team, is killed.  Picard must break the news to her now orphaned son Jeremy.  Worf wishes to reach out to the boy and invite him to join in the R'uustai, a Klingon bonding ritual.  To complicate matters, an alien entity has appeared aboard the Enterprise in the form of Jeremy's mother.

As previously stated, I am not a fan of Trek stories about children.  It's the one theme they handle more clumsily than time travel.  On the other hand, I love Worf stories.  This is not the last time these two opinions will come into direct conflict in the same episode.  That said, I admire the confrontation with grief.  It's a good episode for Worf, for Troi, for Dr. Crusher, for Picard and, most interestingly, for Wesley.  Obviously, Marla Aster's death brings up memories of his father's death in similar circumstances.  The more the writers got away from the wunderkind story line and the more they allowed him to be a real person, the better his character worked.  "The Bonding" is a good example.

Posted by The Armchair Squid at 1:00 AM 3 comments: 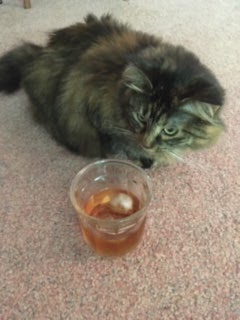 A Bolero combines light rum, Calvados, sweet vermouth and Angostura bitters over ice.  I got my recipe from the New York Bartender's Guide.  I preferred it to last week's drink, though it still wasn't as appley as I wanted it to be.

Calvados ain't cheap.  If I'm putting it in a drink, I want to taste it.  I wondered if balance was the issue.  Maybe less rum and more Calvados?  Or maybe I should try the Calvados on its own.  So I did.

In truth, it's really not so appley, at least not what I would have expected.  Maybe Normandy apples taste different from their North American counterparts - likely, I suppose.  It mostly tastes like a brandy in that the sugar predominates.  It might be interesting to try it side by side with Cognac to note the differences.

As long as we're on the subject of Bolero, you really should watch the following if you haven't yet.  Julliard students, faculty and alumni collaborated for an amazing, socially-distanced performance of Ravel's masterpiece:

Cinzano is an Italian product, originally produced in Turin dating back to 1757.  It was the favored vermouth of the famed lothario Casanova.  Today, Cinzano is owned by Gruppo Campari, based in Milan.  In our final battle, the old war horse takes on our reigning champion, Boissiere. 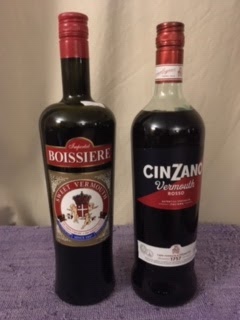 We both preferred the Boissiere in the Manhattan test.  In my opinion, it interfered less with the other ingredients.  That said, the Cinzano was quite pleasant, providing a fuller mouth-feel.  More sugar, perhaps?  I'm not sad to have a bottle around for a while.

Next up: Bitters Battles

This is my last week with the X-Men for a while.  Assuming I stick with the Comic Book Herald reading list - and there's no reason to suspect I won't - I will be back and will in fact pick up exactly where I'm leaving off now.  However, it's time to visit a few other series, starting with Iron Man.

The Claremont X-Men run is every bit as good as advertised.   As Marvel teams go, I have always preferred the X-Men to the Avengers (though I will concede the Avengers movies are better).  And yet, when I jumped on to the X-Men train in #94, I experienced the same frustrations I had with Avengers #89-97: too many characters, too many fight scenes, just too much.  Give me a simple narrative with a small group of relatable characters.  That is the heart of every truly great story ever, no matter how elaborate the trappings and good luck trying to convince me otherwise.  There was so much going on with the Avengers that I barely cared about the outcomes and I worried the X-Men would be the same way.

Chris Claremont settled things down when he became head writer for the series.  Even following a character cast overhaul, the X-Men were a family again.  Stories became simpler and thus more engaging.  Plus, Claremont was committed to developing the female characters.  By #131, Jean Gray is the most powerful and enigmatic team member and Ororo isn't far behind.  In short, I've grown to care about the X-Men - first time I've felt that way since Spidey.

Star Trek: Who Watches the Watchers

Title: "Who Watches the Watchers"
Series: Star Trek: The Next Generation
Season 3, Episode 4
Original Air Date: October 16, 1989
As our story begins, the Enterprise is headed to Mintaka III to resupply an anthropological outpost.  Before our friends arrive, an accident causes the outpost's camouflage to fail.  Unfortunately, two of the pre-Warp Mintakans see the outpost and complications snowball quickly.

"Who Watches the Watchers" is TNG's first great Prime Directive story.   For casual viewers, the Federation's Prime Directive (PD) forbids interference with other cultures and it is particularly strict regarding cultures who do not yet have contact with interstellar life.  Up to this point in the franchise, the PD is generally no sooner mentioned than broken, leaving one to wonder if anyone really takes it that seriously.  The approach here is different.  The PD is violated early - albeit by accident - and the rest of the story is devoted to damage control.

When one of the Mintakans witnesses "miracles" in sickbay and observes the reverence others show the captain, he concludes that Picard must be a god.  As a result of the misunderstanding, the primitive, though logical and scientific, society slips into superstition.  Picard's challenge is convincing them of the limits of his superior technology.  He succeeds, though it's easy enough to imagine the setbacks for the Mintakans if he hadn't.

Kathryn Leigh Scott (Nuria, a leader of the Mintakan community) was born Marlene Kringstad, January 26, 1943 in Robbinsdale, Minnesota.  At age 19, she moved to New York to study at the American Academy of Dramatic Arts.  She also found work as a Playboy Bunny.

After graduating, she landed a job with the soap opera Dark Shadows, the series with which she is most closely identified.  Over the four year run of the show, she played four different roles.  She has lived an interesting and varied life since.  Apart from acting, she launched a publishing company in 1985: Pomegranate Press, Ltd.  She has also written several books, some non-fiction - mostly about her career, including a history of the Playboy Bunnies - but also three novels, including a horror and two mysteries.
Posted by The Armchair Squid at 1:00 AM 8 comments: 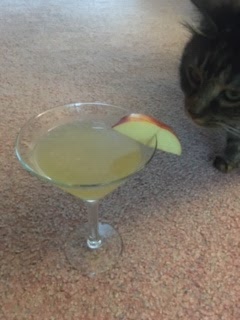 An apple daiquiri combines light rum, Calvados, lemon juice and sugar syrup with an apple slice garnish.  I got my recipe from the New York Bartender's Guide.  The result was nice, though I thought it could have been more appley and my wife would have preferred less lemon.  She did say it might be nice with nutmeg and/or cinnamon - like apple pie perhaps?

Calvados is an apple or pear brandy from Normandy.  The brand I used, Boulard, is apple-based.  David Lebovitz uses it a lot in his Drinking French recipes so I picked up a bottle.  At the store, I learned I've been pronouncing the word incorrectly.  I'd always assumed the second syllable was emphasized, as in Spanish.  But no!  The first syllable carries the emphasis and the second A is a schwa.  It's Calva for short.  That's easier to remember.


Bitters of the Month: Cherry

After we settle on a favorite vermouth (we're close), we'll play with bitters in our quest for the perfect Manhattan.  The standard choice is Angostura, though both orange and Peychaud's are acceptable alternatives.  Anything beyond those would be venturing into house-tailored cocktail territory.  As such, trying out cherry bitters in this context is getting a little ahead of the game for me but I needed a reasonable test of the bitters anyway.

My concern, after tasting the cherry bitters with gin alone, was that while there was certainly cherry flavor exhibited, it might not hold up so well with stronger ingredients.  Whiskey is a nice base liquor for such a test.  It always holds its own, yet it also leaves room for the other players to express themselves.  In this case, I have to say there really wasn't much cherry flavor.  The aroma was there but the taste itself too subtle.

My wife suggested that the bitters might help to enhance the flavors of other cherry-based ingredients - perhaps worth exploring someday.

Artist John Byrne was born July 6, 1950 in Walsall, Staffordshire, England.  His family emigrated to Canada when he was eight years old.  He enrolled at the Alberta College of Art and Design but dropped out before graduating.
In addition to X-Men, Byrne made significant contributions to Fantastic Four and, later, Superman for DC and Star Trek for IDW.  He has a couple of important creator-owned titles to his name as well, including Next Men (previously featured quite a long time ago here) and Danger Unlimited.

Without a doubt, Byrne is the most sophisticated artist I've seen in this exploration since Jack Kirby.  However, as strong as the work is, Byrne does not have the most stellar reputation as an easy person to work with and has not been shy about throwing fellow creators under the bus publicly.  His reputation has even earned him lampoons within the medium.  Both Booster Cogburn in Destroyer Duck and Johnny Redbeard in Savage Dragon are based on Byrne.

Both Byrne and Chris Claremont were inducted into the Will Eisner Award Hall of Fame in 2015.

Posted by The Armchair Squid at 1:00 AM 3 comments:

Episode: "The Survivors"
Series: Star Trek: The Next Generation
Season 3, Episode 3
Original Air Date: October 9, 1989
The Enterprise responds to a distress call too late.  The entire planet of Delta Rana IV has been completely devestated - all life gone.  However, one tiny square of green land survived with one house and one elderly couple still living inside: Kevin and Rishon Uxbridge.  Our friends seek to unravel the mystery of why these two were allowed to survive.

"The Survivors" is a good episode, one of the best of the entire run, in fact.  I don't want to spoil the ending for anyone who hasn't watched it but it is deeply satisfying.  One's reaction is equal parts sympathy and horror - the sort of delicate balance only people like Jean-Luc Picard are able to navigate with delicacy.  It's a Deanna Troi story as much as it's anyone's and a strong one at that.  She is tortured by Kevin's chosen mechanism of shielding the truth from her empathic capacities.

I'm happy to discuss the ending in the comments with anyone who cares to do so.

This is a pretty serious story but there are moments of levity, like this little gem from Worf:

John Anderson (Kevin) was born October 20, 1922 in Clayton, Illinois.  He served in the Coast Guard during World War II.  He went to the University of Iowa for graduate school, earning a degree in drama.
Anderson was a well-regarded character actor for four decades, meaning he scored numerous guest appearances on television but not many principal roles.  He bore a resemblance to Abraham Lincoln, a part he played three different times.  Among many others, he made multiple appearances on Perry Mason, The Twilight Zone and MacGyver.  His most notable big screen role was as California Charlie, a used car salesman, in Psycho.