The result was okay but we prefer whiskey to rum at our house.  My wife is a long-standing fan of a traditional highball, combining ginger ale with rye whiskey, preferably Old Overholt.  So, we tried that too.  One of the joys of mixing drinks is the exploration of flavor combinations.  Almond and lime, for instance, are dazzling together - definitely a case of the whole being greater than the sum of its parts.  While the rum brought out the fruitiness of my soda, the whiskey emphasized the ginger.  For both of us, the rye cocktail was superior.

So, this means I get to name the resulting drink, right?  Ladies and gentlemen, I present the Squid Ball: 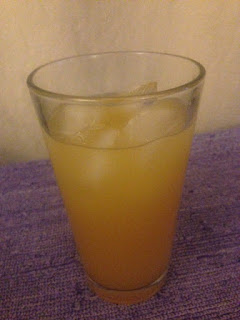 In a highball glass, pour the whiskey over ice, then top off with the soda.  Stir well and serve.

(I could/should probably tinker around to develop a recipe that doesn't require homemade soda but this is what I've got for now.)