Ladies and gentlemen, we have root beer... 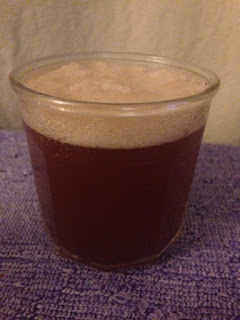 Yet another recipe from Homemade Soda by Andrew Schloss, this "Rooty Toot Root Beer" is quite intensely flavorful: not especially sweet, though.  My daughter, while she liked it, even described it as a little bitter.  For me, it was alright but not as satisfying as the orange honey ginger ale from a couple months back.  We still must see if it passes the ultimate root beer test: floats!

The carbonation process is a bit mysterious.  The way it's supposed to work, after you add the yeast and bottle, the plastic bottles sit for a few days.  You know the yeast has done its job when the bottles harden - and they're really supposed to be rock hard.  That worked beautifully for the ginger ale but not as well this time.  They were harder after a few days but not quite what I expected.  I saw bubbles, though, so I figured the soda was, in fact, carbonating.  Once the bottles harden, they go in the fridge for a week to slow the carbonation down.  I took a chance and put them in, hopefully not prematurely.

I needn't have worried.  The bottles were downright explosive when I opened them.  I don't know if it's worth looking into reducing the carbonation.  I have the same issue with the beer.  The mess is a drawback, of course, but I also regret losing so much of the liquid to foam.  On the other hand, I don't exactly understand all of the microbiological processes involved so perhaps best not to tinker until I learn more.