On the Coffee Table: Rising Stars 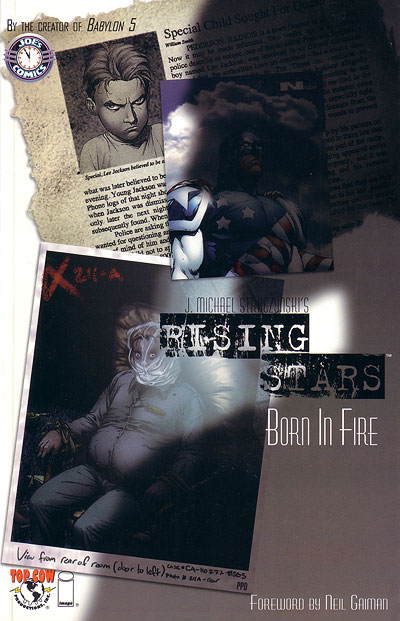 Rising Stars was first published in August 1999 by Top Cow/Image Comics. The story follows the "Specials," a group of 113 people born with special abilities following the appearance of a mysterious light in the sky above Pederson, Illinois.  Rising Stars draws heavily upon the comic classics.  There's definitely an X-Men influence with the idea of public mistrust of genetic mutants.

Even stronger is the Watchmen legacy.  The storyline, at least initially, treads a very similar path to Alan Moore's masterpiece: the Specials are being murdered, probably by one of their own.  John Simon (like Watchmen's Rorschach) sets out to find out whom.  From here the paths diverge. The whodunnit question is resolved relatively early. Alliances are formed and battle lines are drawn between factions.  These lifelong friends still have a lot to learn about one another in this time of crisis.

Born in Fire collects the first eight issues of the series.  Despite the allusions mentioned above, Rising Stars goes far beyond the merely derivative.  The artwork of the series is lush but not overwhelming.  The characters are well-developed.  The end of each issue leaves you eager for more in the next.  The writing feels a little forced at times but overall, this one's definitely a keeper.  I knew I was hooked after issue #5, "The World Between."