As part of its Omnibus series, Dark Horse Comics have compiled collections of Star Wars comics from the franchise's days with Marvel in the 1970s and '80s.  Not a comic fan in my youth, I never gave the series much thought at the time but I have thoroughly enjoyed exploring them over the past couple years.  I have reviewed Volume 1 and Volume 2 in previous posts.

Volume 3 includes issues 50-67 plus King-Size Annual #2.  As noted in earlier posts, the Marvel comics are considered lower canon than the Dark Horse comics as so much of the material was later contradicted by the films.  This wasn't Marvel's fault, of course.  George Lucas and his minions were not forthcoming with their own narrative plans.  The comic artists had to generate years' worth of stories with very little guidance.

As such, the comics followed an evolutionary path all their own with fascinating results.  Characters and settings that were introduced in the movies were explored more deeply.  Entirely new ideas were initiated, including characters who have endured in more recent works.

Cloud City on the gas giant planet Bespin is, of course, the setting for the climactic scenes of the film The Empire Strikes Back.  Lando returns to Cloud City at the end of issue #55, entitled "Plif!"  All has gone very poorly in Lando's absence. He is attacked almost immediately upon arrival by his former right hand man, Lobot. 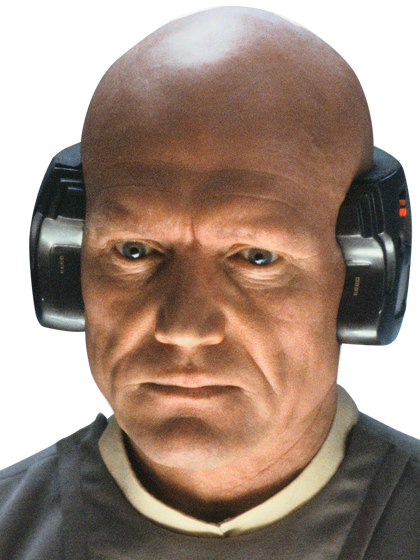 Lobot - listed in the credits simply as Lando's aide - has no lines in the film, though he is crucial to plot development.  I have to admit that I'd never really given Lobot much thought, assuming he was a human with a really cool headset who didn't speak because he didn't have need.  However, the comic identifies him as a cyborg - a fact I'd never considered.  Upon research, I found that the headset is actually a cybernetic implant.  He is mute from the required lobotomy for the implant.  "Lobot" is short for lobotomy.  Who says you can't learn anything from comic books?

The Ugnaughts return in issue #56, "Coffin in the Clouds."  The gas mine workers, disgruntled with the imperial administration of Cloud City, have planted bombs throughout the installation.  Lando and Captain Treece, the Empire's man in Bespin, eventually work together to dismantle the bombs.  However, Treece predictably betrays Lando, literally kicking him off the city's edge to plummet to his death.  Fortunately, Lobot has come to his cyborg senses and rescues Lando. 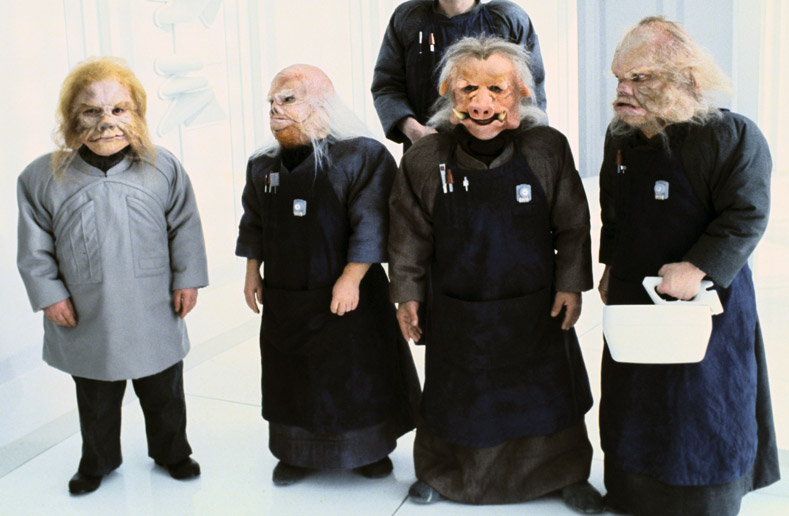 The two land safely in a Bespin marsh.  Not long after, they encounter an Ugnaught news crew eager for a story.  Apparently, at least in the Marvel Universe, Ugnaughts talk like pirates.

Issue #56 also introduced the character of Shira Brie (spelled Brei initially), a fighter pilot for the Rebellion and apparent aspirant for Luke Skywalker's affections.  However, in issue #63 ("The Mind Spider!"), we learn that Shira is not quite what she seems.  She is an Imperial agent groomed by Darth Vader to destroy Luke.  Eventually, Shira evolves into the Sith character Lumiya (first appearance Marvel #88) who has been featured in numerous Expanded Universe story lines ever since.


While I dabble in other idioms, Star Wars will always be geek home for me.  I can't help feeling a twinge of regret at not having found these comics when I was a kid and so eager for more Star Wars stories between movies.  I was too busy saving my allowance for the action figures, I guess.  While my interest in superhero comics is in serious jeopardy, I expect I'm into Star Wars comics for the long haul.

Posted by The Armchair Squid at 9:16 PM