We had the Mocks over for New Year's Eve for food, games and general merriment.  The French 75 was our featured cocktail for the evening: 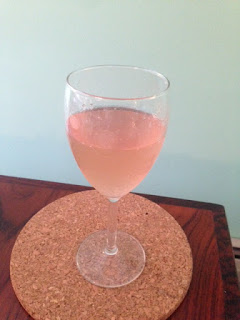 It's mostly champagne with bits of gin, lemon juice, sugar syrup (my own homemade) and grenadine.  The drink, often made with Cognac rather than gin, dates from World War I when the kick was said to be equivalent to being shelled with the French 75mm field gun.  I wouldn't say it's nearly that potent but it was pleasant enough - pretty, too.

I got my recipe from American Bar by Charles Schumann.  Interestingly, the book also includes a French 76 that subs out the gin for vodka.  The gin doesn't bring much flavor to the party but it might make for an interesting side-by-side comparison sometime.