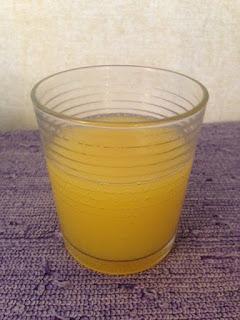 I have successfully brewed my own soda from scratch.  The recipe for orange honey ginger ale came from Homemade Soda by Andrew Schloss.  While my first experiment from the book (see here) was somewhat underwhelming, the results this time were far more successful.  Both wife and daughter are ginger addicts and they were pleased.

The most difficult part of the project was the prep work for the syrup.  Grating a half-cup of gingerroot is a lot of work.  Sterilizing bottles isn't exactly fun but it's not difficult.  Most of the process is just waiting.  Once you bottle, you let the yeast do its carbonating thing for a week-and-a-half, then it's ready.  And carbonate it does!  Opening the bottles over the sink is essential.

I don't think the gallon I made will last long.  I am saving one 16 oz bottle for Mock's daughter.  She's a big ginger ale fan.  My own daughter has already put in a request for me to make more.  I'll hang on to this recipe but I'm eager to move on to root beer.