A greyhound or a salty dog? 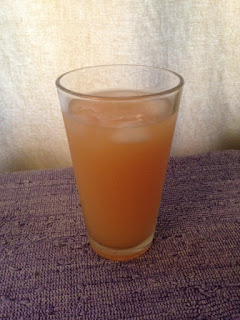 My wife picked up a bottle of grapefruit juice and suggested it might go well with vodka or gin.  That opened a discussion.  I always thought that grapefruit juice with vodka was called a salty dog but my wife insisted it's a greyhound, a name I'd never heard.  As it turns out, while both contain these ingredients, the two are entirely different cocktails.  A salty dog is served in a cocktail glass, salted rim, with equal parts juice and vodka.  A greyhound is served in a collins glass: 2 oz. vodka over ice, topped off with juice.  It's essentially a screwdriver but with grapefruit juice rather than orange.

The greyhound was, in fact, what she wanted so that's what I made.  I got the recipe from American Bar by Charles Schumann.  Here's another question, though.  As I used ruby red grapefruit juice, does that change the name of the drink?  Color matters in mixing.  I found ruby red greyhound recipes online, though all seem to involve additional ingredients.  So, until I learn otherwise, I'll stick with the basic name.