Squid Games: The Heart of Africa

Ticket to Ride is my wife's favorite board game.  When she suggested games on Sunday afternoon and she requested "the usual," I knew exactly which one she meant.  The German-invented train building game has been our standard go-to for quite a while.

I'm fairly confident in claiming it as my own favorite at this point, too.  For starters, I love maps.  I have loved them from about age 6 onward.  So, any game involving maps - and I prefer real world maps to invented world maps - is already winning with me.  For this reason, I love Pandemic, too.  I also prefer a game in which no players are eliminated - everyone's in it until the end.  Pandemic's great that way also.  Where Ticket to Ride has Pandemic beaten is that with the former, I feel satisfied whether I win or lose.  I get to build trains and building trains is fun.  I am a little disappointed if I can't finish all of my routes but I can live with it.  I can certainly live with losing.  Pandemic, on the other hand, is a lot more stressful.  It's a cooperative game and if we lose, the urge to play again right away is powerful.  Mind you, it's still loads of fun but for a relaxing afternoon, I'll take Ticket to Ride every time. 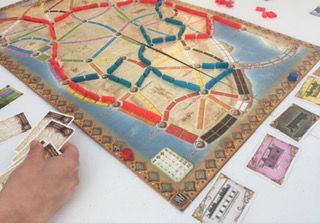 While the original game is based on a USA map, the franchise has published several variants and expansions using others.  This weekend, we tackled Africa.  One of the main challenges in approaching a new map is, of course, the less familiar place names.  Ticket to Ride also favors the names in the local language rather than the English ones as they should.  However, it does make the names more difficult to remember, let alone pronounce.  Most of the longer and higher-scoring African routes run North-South, as is also true with the India map.  However in Africa, most of the action seems to play out along the coastlines whereas with India, it runs down the middle of the country.

With each new map, Ticket to Ride also adds a wrinkle.  The Heart of Africa includes terrain cards which offer a bonus for building a route through Desert/Savannah, Jungle/Forest or Mountains/Cliffs.  It's an interesting variant as it brings more importance to the colors of the train car cards.  One also has to consider whether or not it's worth using a turn to get more terrain cards rather than simply playing a route.  I'm not sure the change actually makes the game better but it is interesting for variety.

Overall, I would say the USA and Europe maps make for the best game play but I do enjoy exploring the others.  We'll certainly play The Heart of Africa again.
Posted by The Armchair Squid at 1:00 AM