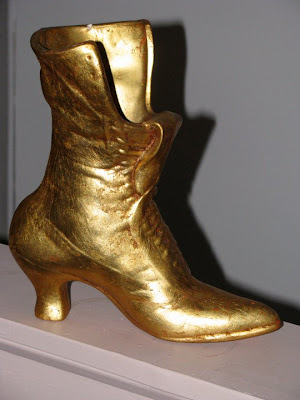 We went to an Oscar party last night, our second year in a row attending this particular affair. The golden boot above was my door prize from last year's soiree. Vermont is a state of small towns and it's easy to feel that everyone in the state knows each other, or at least isn't separated by more than two or three degrees. We have, in fact, two separate connections to our Oscar hosts. I taught all three of the children in high school choir once upon a time and My Wife worked with the mom at the same company for several years.

I didn't do too well in the pool, only picking eight of the awards correctly. I don't know if My Wife did much better. We were somewhat hampered by the fact that we've only seen one film that was nominated for anything: Tinker, Tailor, Soldier, Spy. But the Oscars are always plenty of fun regardless. My Wife taught us about proper hemming. Apparently, American men (like George Clooney) never get their pants properly hemmed whereas European men (like her boyfriend, Colin Firth) do. Apparently, this is how it should look: 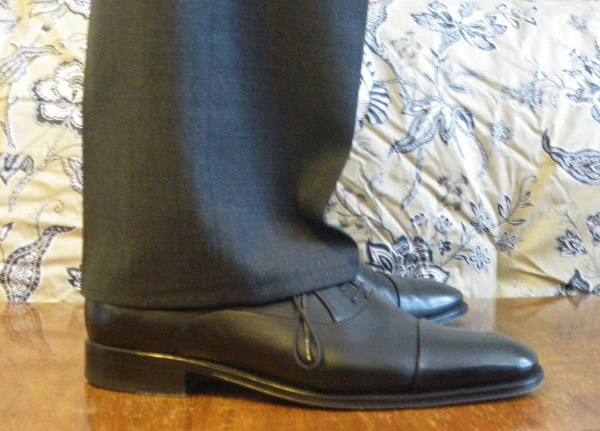 We had our own little party on Saturday night, entertaining the Mocks for another game night. The main attraction was a new addition to our collection: Pandemic.

It's a cooperative game - not in the everyone holds hands and sings "Kumbayah" sense. Rather, it's get in gear, people, or the whole world dies in puss-running agony. We played through, I believe, three times and finally managed to save humanity on the last attempt. I think Mock is now as obsessed as we are. The game is designed for 2-4 players but, as he pointed out, one could probably play a satisfying solitaire game.

We had a nice lunch in Waterbury on Sunday at Arvad's Grill & Pub. It was our second time there and, while I intended to order something different from before, I think I got the Roadside Chicken Sandwich last time, too. No matter - it's excellent. The Chocolate Mousse Torte was a great choice for dessert, too.

Finally, I have a link to recommend, sent to me by Kaitlyn Cole: 12 Colleges Bringing Comic Books into the Classroom. If you're interested in either education or comics, check it out.

Posted by The Armchair Squid at 8:20 AM