MirrorMask was a project between McKean and Neil Gaiman, longtime comic book collaborators.  As discussed in previous posts, Gaiman's work is hit-or-miss for me.  The film Coraline?  Good fun.  The Sandman comic series (for which McKean did the artwork)?  Didn't care for it.

MirrorMask was originally intended as a direct-to-DVD release but it got a short theatrical run as well as a screening at Sundance.  The story is, on its surface, fairly straightforward: a teenage girl in a circus family is troubled by goings on at home.  She gets stranded in a dream world and has to find her way back.  From there, things get more complicated and the main knock on the movie, from both professional critics and the tough crowd at our house, is that it's rather difficult to follow. 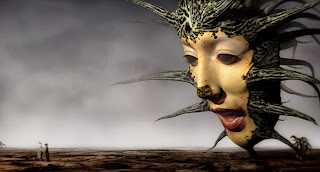 Image via Tales from the Old Wooden Art Table

The artwork, however, is well worth the show.  So, while Gaiman's writing efforts are sub-par, McKean's images are a great success.  The acting's pretty good.  I thought the lead, Stephanie Leonidas, was wonderful as Helena - beautiful, too.

Finally, the following is a song that I generally don't like.  I have a strong Carpenters aversion.  However, this scene is very cool:

Posted by The Armchair Squid at 5:03 PM