Family Movie Night: The Return of the King

Title: The Lord of the Rings: The Return of the King
Director: Peter Jackson
Original Release: 2003
Choice: My Wife's
My Overall Rating: 5 stars out of 5 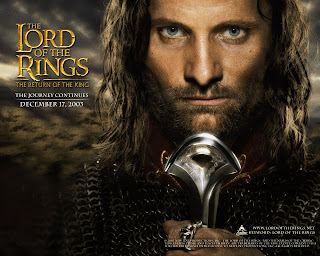 Eleven Oscars.  Not that Oscars are everything.  After all, Titanic won eleven and nearly everything associated with that movie makes my skin crawl.   However, those eleven Oscars are at least an indication that I'm far from the only person who considers Return of the King to be one of the greatest films ever made.

Recently, my blogger pal Suze asked me which of the three Lord of the Rings films was my favorite.  At the time, I said The Two Towers, the middle movie.  But now, having watched all of them again over the past few weeks, I'm not so sure.  All three have strong selling points.  The Fellowship of the Ring is a loving introduction to the story and perhaps the most beautiful visually.  The Two Towers is the heart of the tale and provides lots of meaningful screen time to my two favorite Tolkien characters: Gollum and Treebeard.  The Return of the King provides a magnificent conclusion.  By the end, the viewer feels as invested in the journey as the characters.  We have all defeated Sauron.  We have all made it back home.

The story's conclusion reveals its true hero: the eternally faithful Sam.  Frodo's the star, of course, and he deserves admiration for having borne the burden of the Ring.  But it is Sam who carries him into Mt. Doom when his own strength and will are gone.  It is Sam who saves Frodo from himself.  Without Sam, the mission fails and Middle Earth is lost.

The end also reveals the tale's most tragic figure: Gollum, of course.  For the most part, The Lord of the Rings follows the fairy tale dictum that everyone gets what he or she deserves.  However, for as genuinely evil as he proves himself to be, Gollum's sentence far outweighs his crimes.  After the centuries of pitiful slavery to the Ring, his fiery death seems almost merciful.

Posted by The Armchair Squid at 11:56 PM