On the Coffee Table: Mr. Punch 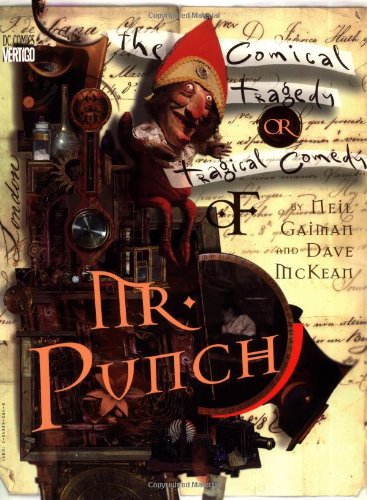 Mr. Punch is a graphic novel by Neil Gaiman and Dave McKean, the duo who also created the film MirrorMask (review here).  The narrator recalls memories from his childhood, particularly those involving his grandfather who runs a failing seaside arcade.  Mysterious characters inhabit his grandfather's world: a woman who performs as a mermaid, a hunchback uncle and, most important to the theme of the tale, the Punch and Judy man.

Gaiman's story is interwoven with the truly disturbing puppet show, Punch and Judy.  Mr. Punch, essentially a serial killer, manages to evade death and punishment for his sins.  He is a right-hand puppet - never comes off during the performance.  The narrator's grandfather is not so lucky.

As I have written before (in my reviews for both MirrorMask and Coraline), I have mixed feelings about Neil Gaiman's work.  On one end is "The Doctor's Wife," the first of two episodes he has written for Doctor Who and also one of my very favorites.  The following exchange is one of the best in the entire run of the show, downright swoon-worthy:

Doctor (exasperated): You didn't always take me where I wanted to go.
Idris/TARDIS: No, but I always took you where you needed to go.

On the other end is Marvel 1602, a comic book series I didn't even blog about I was so disappointed.  The story started out quite promising: all the stars of the Marvel Universe turn up in Europe 1602.  If Gaiman had stuck with that concept through to the end, I probably would have enjoyed it just fine.  But, no!  There had to be a time travel/alternate universe storyline explaining how they got there and how they might get back to their proper temporal home.  To me, it was an all-just-a-dream cop-out - not good enough.

Mr. Punch falls somewhere in between.  The story has magical moments.  The narrator's description of how the crocodile puppet comes alive in his hand when he puts it on is wonderful.  The tale is more realistic than Gaiman's fantasy work, though McKean's art provides a dreamworld atmosphere.  The incorporation of the Punch and Judy is both clever and appropriately creepy. Mr. Punch is not, however, the sort of book that would lead me to seek out others by the same author. Take away the P&J references and it's just another story of a protagonist trying to make sense of his family's sinister past.

Dave McKean's artistic style is perhaps best described as collage, often incorporating drawn, painted and photographed elements in the same panel.  In Mr. Punch, the human characters are usually cartoons whereas the P&J puppets are photos.  The humans are, in fact, drawn to look like puppets which is savvy.  While McKean's style is certainly engaging, I think his art works better in film than it does in comics.  He's the real star of the show in MirrorMask.  While the art is critical to the tone of Mr. Punch, the images are frequently too busy for my tastes.

Posted by The Armchair Squid at 11:51 PM