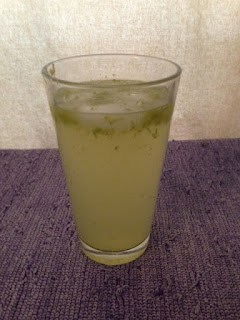 This recipe for lime sparkling water came from Homemade Soda by Andrew Schloss.  With the zest and juice of half a lime in each, it was quite limey indeed.  I was expecting it to be a bit sweeter but it was pleasant enough.  My daughter wasn't so impressed.  She didn't even finish hers.  I'm not sure it was worth the effort when when one can so easily pull a Poland Spring seltzer out of the fridge but this is the beginning of a process for me.

I have set a goal to brew my own root beer and ginger ale.  I have brewed alcoholic beer before.  I've managed to do it three times, in fact - successfully without poisoning anyone or even making a huge mess.  But it's a lot of work, especially for a beverage that can only be consumed by 2/3 of my household.  While I'd like to get back into brewing, I'd like to supplement it with beverages my daughter can enjoy, too.

Turns out, making soda's pretty easy.  The only tricky part - at least so far - is making the simple syrups.  The lime soda involved a basic sugar syrup combined with the limey stuff, then add seltzer.  My next project, orange honey ginger ale, is a little more involved.  The syrup itself is already done and sitting in the fridge.  It'll keep for a couple months.  I'll brew once we're through the holidays.

Has any of you tried to make your own soda before?