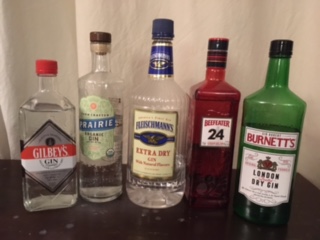 A Bronx Cocktail combines gin, orange juice, dry vermouth and sweet vermouth.  It's a drink whose heyday is long past but it's one of our house favorites, especially with fresh OJ. I use slightly different proportions from Eric Felten's in How's Your Drink?  He favors a 6:4:1:1 ratio for the ingredients listed above.  I double the vermouths.  Particularly for this current exercise, I want to taste them as much as possible without threatening the other flavors.
And so we enter the world of gin.  This could take a while.  Unlike the other liquors we've tasted so far, gin offerings are vast on Vermont's liquor store shelves in all price ranges.  As such, I anticipate a long and non-linear path in our gin explorations.  Let's get to it.
Fleischmann's vs. Beefeater
Fleischmann's has been our go-to for a while.  I will admit this up front: we've been slumming it with gin for years.  We're not exactly martini people, by which I mean gin is by no means our liquor of choice.  So a weak gin generally suits us fine.  Why pay more for something you don't really want?  Yes, I realize this presents an awkward contradiction as we embark upon our journey.  But this is why we seek to learn, right?
Beefeater, on the other hand, is quite a strong gin so this was an easy choice for both of us.  Less is more.
Winner: Fleischmann's
Fleischmann's vs. Barr Hill
Barr Hill is a local Vermont product.  It's unusual for the fact that it is made with honey in addition to the juniper berries.
My wife preferred Barr Hill, finding it a smoother flavor, the extra sugar perhaps taking the edge off of the gin.  This presents a different sort of dilemma.  Barr Hill is a lot more expensive.  A 750 ml bottle of Fleischmann's costs $5.99 in Vermont.  Barr Hill costs $35.99.  So, even if Barr Hill is better, is it six times better?  No.  This necessitates two categories moving forward.
Winner and Champion, When It's on Sale Category: Barr Hill
Still Champion, Staple Category: Fleischmann's
Burnett's vs. New Amsterdam Stratusphere
My wife thought the Stratusphere tasted metallic.  It's also more expensive.
Winner: Burnett's
Burnett's vs. Barr Hill
This time it was Barr Hill that was deemed more metallic.  To me, it just tastes more ginny.  I guess I simply prefer a lighter gin - not actually a surprise.
A beat B, B beat C and A is in C's price range.  So...
Winner and Undisputed Champion: Burnett's
Seagram's Extra Dry vs. Prairie Organic
Yup, Prairie is a Minnesota-based distiller specializing in spirits made from organically grown ingredients.  It's good, too, possessing a more floral taste than the old war horse, Seagram's.
Winner: Prairie Organic
Beefeater 24 vs. Bombay Sapphire
This was a battle of gins in colorful bottles: the 24 in red, the Sapphire, of course, in blue.  Both have classic gin flavors, my wife describing the Sapphire, in particular, as like an old country club gin.  The Sapphire has a nutty taste whereas the 24 is sweeter.
The 24 comes from the 24 hours during which the gin is infused with 12 botanicals, including both Japanese and Chinese tea.
Winner: Beefeater 24
Beefeater 24 vs. Prairie Organic
Prairie was more floral, 24 more piney.
Winner: Prairie Organic
Burnett's vs. Prairie Organic
Burnett's tastes less woody.
Winner and Still Champion: Burnett's
Gordon's vs. Gilbey's
It's a battle of the G's, and two of the cheaper brands on the shelves.  Gordon's wins.  It was the fruitier of the two.
Winner: Gordon's
Burnett's vs. Gordon's
My wife didn't really have a preference, though she did feel the Burnett's was less piney.  All else being equal, price is the deciding factor.  Burnett's is cheaper per volume.  So...
Winner and Still Champion: Burnett's
"Maybe I don't like gin," my wife said.  We've been edging towards this conclusion, for both of us, for a while now.  Eleven brands into these tests (count 'em), it's pretty clear we both shy away from the stronger gin flavors.
The question, then, is where to go from here.  Do we switch to another gin-based drink?  My wife suggested gimlets though I might advocate for a new direction.  Orange season won't last forever anyway and Bronx cocktail quality is likely to decline when it ends.  Or do we move on to something else entirely, simply leaving this particular experiment by stating that Burnett's is our best so far?
Stay tuned.
Posted by The Armchair Squid at 1:00 AM