As discussed in this post, ArtsRiot is the primary venue for the VSO's Jukebox series featuring their string quartet.  It is both restaurant and concert space, managed under the same umbrella but operating in separate rooms.  As such, it is usually our easiest dinner choice before the concert.  The cuisine is described as "inspired by flavors from around the globe," which in this case typically means American/Asian fusion. 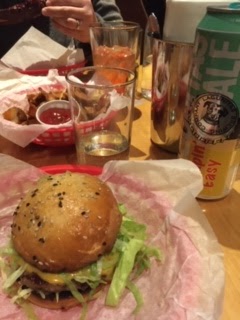 ArtsRiot would seem to be in transition at the moment, looking to emphasize the event hosting aspect of the business over the dining.  The food is still perfectly nice but there's less of it.  The menu - not even available for viewing on the website anymore - is significantly reduced, marketed as tailored to the evening's concert.  Servings are smaller, too.  I'm pretty sure the 400 Burger I ordered used to come with fries.  No longer.  This change is not a deal breaker for us.  In a fair trade, the prices were lower, too, I believe.  We managed under $50 for the three of us, not bad for a night out.  The cost was helped by the fact that I was the only one to order an alcoholic beverage: an impressive, pint-size can of Lagunitas Sumpin' Easy.  Also, no dessert was offered.  We were even warned off what gelato was available.  Not soft enough to eat.

Our daughter's favorite thing about the restaurant is the Guns 'n' Roses poster on the ceiling above the loft.  She always checks to make sure it's still there.

For the concert, the quartet was joined by a soprano vocalist, Mary Bonhag.  She's a wonderfully dynamic performer.  I might quibble with some of her classical technique - taller, rounder vowels would be nice - but she more than makes up for it with her daring and her variety.  The program began with the atypically conventional "Laudamus Te" from Mozart's C Minor Mass but also included the downright bizarre "Sequenza III for Female Voice" by Luciano Berio.

Ms. Coffey, in the following, offers more of the technique I would wish: