Once upon a time, there was no such thing as Star Trek.   No one but Gene Roddenberry knew anything about the USS Enterprise, Vulcans or Klingons.  Such orders as "Beam me up, Scotty!" and "Set phasers to stun!" had not yet been introduced to playground adventures throughout the United States.

Then one day, a show idea was pitched to NBC.  A pilot was made.  The pilot was rejected.  Happens all the time.  But this time, in an unprecedented move, the network asked for a second pilot.  Take 2 passed muster and the greatest franchise in American science fiction television was born.  The original pilot, however, would not be aired until 23 years later.

"The Cage" contains many elements that would eventually become familiar to Trek fans worldwide.  The theme music is in place.  The iconic Starfleet insignia is stitched over the right breast of the uniforms.  Most importantly, Mr. Spock is already on board.

The rest of the Enterprise crew is unique to this episode.  The Captain is Christopher Pike, as played by Jeffrey Hunter.  Hunter declined the opportunity to reprise his role in the second pilot, his character thus reduced to trivia question answer status.  Hunter passed away in 1969 at the age of 42.

The story is vintage Trek (all of those cliches had to start somewhere).  The Enterprise responds to a distress signal, originating from a Class M planet (a Roddenberry-invented designation for worlds capable of supporting life).  Captain Pike takes an away team to the surface.  The distress signal is part of an elaborate trap set by the Talosians, the planet's inhabitants.  Pike is captured.  He and the crew back on the ship struggle to spring him. 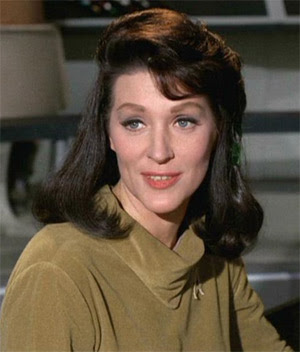 One interesting element of this first Trek adventure was the casting of a woman as First Officer, a progressive idea for 1964-65.  Comments by Pike indicate that the concept is a bit of a stretch for even his 23rd century sensibilities.  The part was played by Majel Barrett, Roddenberry's girlfriend.  The two would eventually be married in 1969, not parting until his death in 1991.  Barrett would play various roles in Trek series over the years, most memorably as Lwaxana Troi on Next Generation.  She died of leukemia in 2008 at the age of 76.

I am not a Trekkie - not yet, anyway.  Inspired by comic books and enabled by Netflix's instant viewing capacity, I've decided to watch the entire saga - all six TV series plus movies - from the beginning.  How far will I get?  How often will I blog about it?  Only time will tell.

Undaunted by the fact that this ground is already well-covered in the blogosphere and over the Web at-large, I shall boldly go where no squid has gone before.

Posted by The Armchair Squid at 8:13 PM