On the Coffee Table: The World at Night

Title: The World at Night
Author: Alan Furst
The World at Night is the fourth book in Alan Furst's Night Soldiers series, all spy novels following (for the most part) different protagonists in World War II Europe.  This time, our hero is Jean Casson, a film producer.  We join Casson's story just before the German occupation of Paris.

The espionage portion of the tale is light.  He gets caught up in the game reluctantly and, in fact, his mission doesn't go too well.  For the most part, he's just trying to get along with his usual high society, playboy lifestyle in the context of the new, more restrictive and perilous political reality.  He worries about his Jewish friends but not as much as we, as readers with historical hindsight, know he should.  The spying is an inconvenient necessity more than a moral imperative.  Further complicating matters, he falls in love.

While this is not the book that would hook me into the rest of the series, it is an interesting addition to the broader canvas.  It makes sense that some of the spy work would be assigned to essential civilians who, in turn, would be likely to fail.  Furst is much better at setting than he is with character.  His war-stifled Paris is vivid, shockingly quiet for a city that normally never is:


Once upon a time they'd loved this hour in Paris; gold light spilling out on the cobbled streets, people laughing at nothing, whatever you meant to do in the gathering dark, you'd be doing it soon enough.  On theses boulevards night had never followed day - in between was evening, which began at the first fading of the light and went on as long as it could be made to last.

So too, his vision of northern France:  "The Vexin - above Paris along the river - was fighting country, rather bloodsoaked if you knew the history.  But then, people fought over beautiful things, a side of human nature that didn't quite have a name."

Unlike the rest of the series, the next book, Red Gold, continues the story of The World at Night.  It's not giving much away to say that the one story ends with some... ambiguity.  So, I am curious to know what happens next.

My friend and local food celebrity Nancy Mock hosts an annual taco/margarita gathering in the summer.  Naturally, my wife put me in charge of our margarita contribution.  Strawberry season coincided nicely this year. 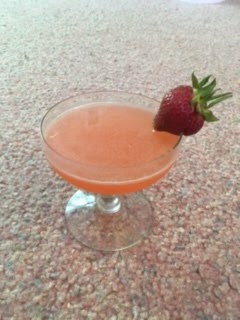 Fortunately, I had time for tinkering before the big day.  I got my basic recipe from The New York Bartender's Guide:  silver tequila, triple sec, strawberry syrup, lime juice (4:1:1:4 proportion).  I went with a simple strawberry garnish and skipped the salted rim - as previously discussed, not a fan.  My strawberry simple syrup recipe came from Fifteen Spatulas.  My first attempt was too limey which suggested toying with the proportions.

One needs to be careful in experimenting with recipes.  Lime is an essential flavor in a margarita.  Without it, the drink would really need to be called something else.  But if the strawberry is bringing only color, why not just use a splash of grenadine instead - same flavor, same color, less fuss?  Injecting enough strawberry without killing the basic character of the root cocktail was the challenge.

Testing the syrup on its own was step one.  Thank goodness I have a daughter who likes Italian sodas.  She did note the first one didn't have enough syrup so I added a little more - 2 oz. total - and more ice to the second.  Winner - with distinct strawberry flavor, not just sugar.

Still, I felt more strawberriness wouldn't hurt.  Per my wife's suggestion, I left the strawberries in longer during the cooling stage for the second batch of syrup.  Then for the pitcher, I adjusted the proportion of the ingredients above to 4:1:2:2.  I also tossed in chopped berries at the end. 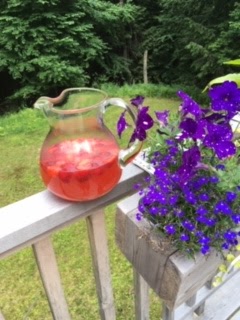 Reviews at the party were good.

A Window Above: She's Got a Way

This is a song I have long associated with my daughter.  The "smile that heals me," the laugh that "reveals me" and the "light around her" are all reminiscent of the spell she first cast upon me as a little girl.  Years pass and the little kid is replaced by a young woman, turning 16 soon - too soon.  The father/daughter relationship gets more complicated as life gets more complicated.  But she can still floor me with a smile. 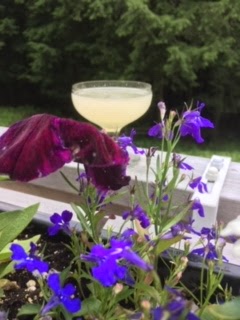 A Castor's Gold combines light rum, honey syrup, lime juice and horseradish.  I got the recipe from The One-Bottle Cocktail by Maggie Hoffman who in turn credits Adam James Sarkis of Phoenix Cocktail Club in Milwaukee.  The drink is named for Nicholas Cage's character in Face/Off.

This was my first experience with double straining, I assume to keep the little bits of horseradish out of the drink.  I will confess that I am a bit of a wimp when it comes to horseradish, even going pretty light on the wasabi with my sashimi.  Here, I have to admit that it made for a rather exciting drink.  Mind you, the scant quarter-teaspoon goes a long way.

A Window Above: True

Pretty sure I first heard "True" in the school dance scene in the John Hughes classic Sixteen Candles.  It kicks off with one of the all-time great intro hooks.  You've also got to admire lyrics that pay tribute to both Marvin Gaye and Vladimir Nabakov.  "Seaside arms" is a Lolita reference.  "True" was by far Spandau Ballet's biggest hit, topping the British charts for four weeks, climbing to #4 in the US. 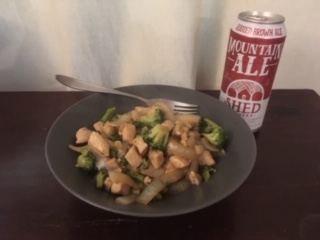 I got this recipe from Mark Bittman's How to Cook Everything: The Basics.  Typically of stir-fry, most of the work is in the prep.  I'd probably pick different vegetables next time - something in season - but the end result was decent.  The girl happily ate two bowls, always a good sign.  As I have written before, I've been making stir-fries for much of my life but usually with a bottled sauce.  Making my own is a new adventure.

A Window Above: I Can't Hold Back

"I Can't Hold Back" is Survivor's best song.  Oh yes, I hear you gasping in astonishment.  "Eye of the Tiger" is a classic of its era, surely the song that will carry the band's legacy from now to the end of time, right?  Yes, probably.  But it's not their best.

A couple especially clever songwriting moments in "I Can't Hold Back": 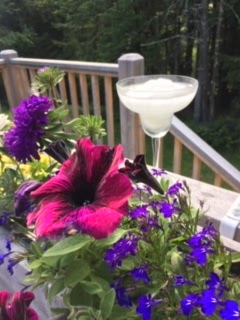 A daiquiri combines lime juice, sugar and rum.  I got my recipe from Eric Felten's How's Your Drink?  I haven't had much luck with frozen drinks in the past but this one turned out nicely.  I expect I've been too skimpy on the ice historically - not a problem this time.

Lime juice and rum!  It'll be the perfect drink to serve Andrew and Susan if they ever come over.

A Window Above: Sailing

"Sailing" is the soft rock song to end all soft rock songs, a dreamscape anthem for what would eventually come to be known as yacht rock.  It won a ton of Grammys for Christopher Cross before MTV killed his career.  It is ridiculously schmaltzy and yet I find it irresistible.  The orchestral intro melting into the gentle guitar riff... hooks me every time. 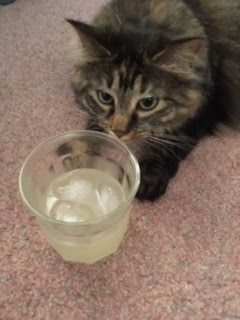 I got my recipe for a Tiburon from The One-Bottle Cocktail by Maggie Hoffman.  She credits T. Cole Newton of Twelve Mile Limit in New Orleans.  The drink combines tequila, lime juice, honey syrup and a dash of Tobasco with a salted rim and a lime garnish.  I skipped the salt - not a fan.  Tiburón is the Spanish word for shark.

The concept of The One-Bottle Cocktail is wonderful: combine a single, staple spirit with ingredients easily found at the grocery store.  This contrasts with the purist mentality of Robert Simonson's 3-Ingredient Cocktails: spirit, bitters and sweetener.  But while the two writers spar during the imagined dinner party in my brain, I hope my own craft shall benefit.

As with Simonson, I enjoy Hoffman's approach to flavor, though hers is certainly more adventurous.  The Tobasco is the intriguing choice in the Tiburon.  It's a common bar ingredient, of course, as it's essential in a Bloody Mary, though unexpected in a Margarita-like concoction.  She's clear on the limits: no more than a dash or it gets vinegary.  The result is "pretty exciting" in my wife's words.