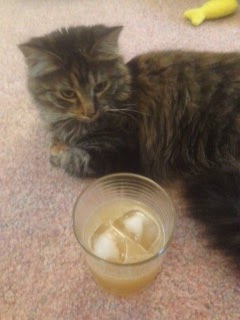 A stiletto combines bourbon with amaretto and lemon juice.  My recipe from The New York Bartender's Guide puts those ingredients in 4:1:2 proportion.  The end result is nice. 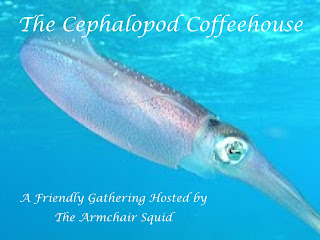 Greetings to all!  I hope you'll join us for the next installment of the Cephalopod Coffeehouse, an online gathering of bloggers who love books.  The next meeting is set for Friday, June 29th.  If you're interested, please sign on to the link list at the end of this post.

The idea is simple: on the last Friday of each month, post about the best book you've finished over the past month while visiting other bloggers doing the same.  In this way, we'll all have the opportunity to share our thoughts with other enthusiastic readers.  Please join us:

Posted by The Armchair Squid at 7:00 AM No comments:

Welcome one and all to the Cephalopod Coffeehouse, a cozy gathering of book lovers, meeting to discuss their thoughts regarding the works they enjoyed most over the previous month.  Pull up a chair, order your cappuccino and join in the fun.  If you wish to add your own review to the conversation, please sign on to the link list at the end of my post. 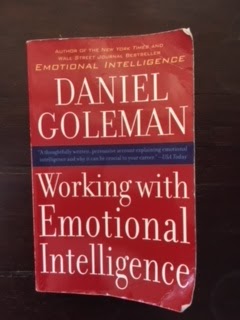 This is the second Goleman emotional intelligence book I've read.  My reflection on the first is here.  This book is targeted to the business community, though I think much of the material pertains to any workplace, including education.  The overwhelming majority of ink is spilt over proving the existence and importance of EQ, much less on how to help.  Clearly the idea is to encourage people to hire him at great cost for workshops and seminars.

Even so, I do feel better equipped to recognize problems.  Unfortunately, Goleman's description of a work environment low on emotional intelligence fits my own current situation to a T.  Even if my own job is basically satisfying - and it is - too many of my colleagues are miserable everyday.  One deals with the problem in one of two ways: by hiding or by trying to help (a confidant also pointed out to me, one can also just leave but that's just an extension of hiding).  On a given day, I probably do some of each and neither is satisfying.  Goleman's thinking does fuel some new ideas on approaches to take.  Having been in my district a while, I have gained a certain measure of trust among my colleagues and even - dare I say it? - administrators.  A few thoughtfully planted suggestions in the right ears could potentially move things in a positive direction.  Food for thought.

Please join us and share your own review of your best read from the past month.  This month's link list is below.  I'll keep it open until the end of the day.  I'll post June's tomorrow.  Meetings are the last Friday of each month.  Next gathering is June 29th. 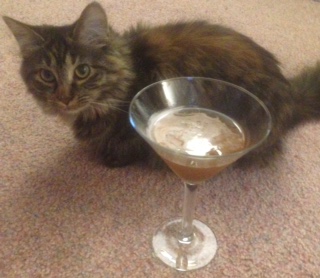 A Canadian Cocktail combines Canadian whisky with triple sec, Angostura bitters and bar sugar.  Basically, it's a sweeter version of a Manhattan.  My recipe came from The New York Bartender's Guide.

A Window Above: Stand by Me

My affection for this song is mostly tied to my love for the 1986 movie of the same name (read more here).  Because of the film, the song reached Billboard's top 10 twice, 25 years apart.  It was by far King's most successful solo recording, earning him millions in royalties over the years.  King was also the lead singer of the Drifters for many years, singing lead on that group's top hit, the bittersweet "Save the Last Dance for Me." 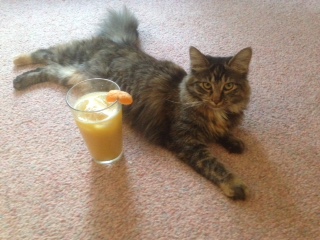 Yes, I agree.  Bocce is not spelled with that strange extra I.  But that's the way it's spelled in The New York Bartender's Guide edition I own so we'll keep it there.

The drink combines amaretto and orange juice.  The recipe calls for an orange slice garnish but I went with a section of clementine.  The drink is quite lovely.  Amaretto is scrumptious stuff.  Technically, I have a nut allergy but I have also recently learned that an almond isn't really a nut.  It is a droop, like a peach or plum.  This is good because almonds are yummy, especially in liquor form!  I discovered some time ago that it goes nicely with lime.  Orange works, too.

What any of this has to do with the game of Bocce - Italian in origin, dating all the way back to Ancient Rome - I don't know.  Maybe The Scamp knows.  She's quite an expert at chasing balls rolling across the floor.  Sadly, I think she's on the verge of outgrowing that short and precious time when a kitten will play Fetch.

A Window Above: Maybe I'm Amazed

I have had a complicated relationship with Paul McCartney for most of my life.  No, of course I've never met the man.  But Sir Paul was a Beatle and that band has loomed large in my musical experience since I was 13 (story here).

When I first fell in love with the Beatles, I was all about Paul.  He was the best-looking member, as confirmed by my older sister, and the one with the prettiest voice, as confirmed by Dad.  What early teen doesn't wish above all things to be beautiful?  But as I learned more about the Beatles story, particularly the break-up, my feelings toward Paul soured.  I also never cared much for his solo work.  While none of the ex-Beatles quite lived up to their own impossible standards after the split (nope, not even John), Paul's offerings especially tended toward the nauseatingly saccharine.

However, there is no denying McCartney's one supreme musical gift: melody.  Without a doubt, he is the world's greatest living melodic composer and he has to be on a very short list with guys like Mozart, Beethoven and Rossini for the all-time crown.  While his lyrics are frequently atrocious - "Live and Let Die," anyone? - his capacity for creating heart-rending tunes is astonishing: "Here, There and Everywhere," "Yesterday," "Let It Be," "My Love," "Blackbird," "Hey Jude" and seemingly on forever.

April 17, 1970 is a date of enormous significance in rock music history.  With his first solo album, Paul sent a clear message to the adoring public: the Beatles were finished.  Both John and George had already released solo work while the band was still a going concern but Paul had long been the one working hardest to hold the group together.  Mind you, it was his own control-freak tendencies that drove the others away.  Even so, if Paul was giving up, the Beatles were done.

The album is deeply personal and intimate.  McCartney is the only performer, recording and dubbing all of the tracks himself.  None of the work is exactly Beatles-worthy, with one glaring exception.  "Maybe I'm Amazed" is, in my humble opinion, the last truly great song he ever wrote.  Humility in the face of love - there's that theme again.  The melody is vintage Paul as are the chromatic piano runs.  Incredibly, the studio version was never released as a single. 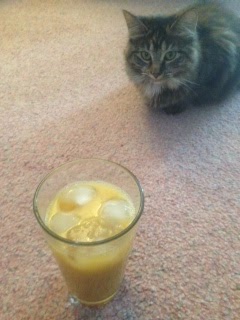 A rum screwdriver is simple enough: dark rum and orange juice.  My recipe came from The New York Bartender's Guide.  Once again, ingredient management becomes an important aspect of this hobby.  As my wife bought OJ for last week's drink, I had to use the rest quickly (with some welcome help from juice-loving daughter).

The rum did a nice job shining through again this week.  Perhaps it's the rum I'm using, nothing special but effective: 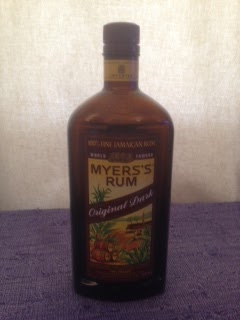 A Window Above: The Tracks of My Tears

1965 is to the pop music industry what 1939 is to cinema: arguably the golden year.  The Beatles were well-established and the Rolling Stones and Kinks eagerly followed their lead across the pond.  The Beach Boys were coming into their own, too.  Bob Dylan was finding a mainstream audience.  Perhaps best of all, Motown was in full-flight.  The Four Tops, the Temptations and the Supremes were all cranking out smash hits.  Check out a list of the top songs from 1965 (like this one) and you'll be amazed by the level of quality.  There are masterpieces like the Beatles' "In My Life" and "Yesterday" that aren't even on that list.

It is telling of 1965's prowess that a song almost universally hailed as one of the all-time greats never even cracked the top 10 of Billboard's Hot 100.  "The Tracks of My Tears" draws you in with one of the most gently soothing electric guitar licks you'll ever hear.  Cue the Miracles, the writers and singers of Motown's tightest vocal harmonies, then the inimitable Smokey spinning soul music's best falsetto.  The song is an unforgettable three-minute journey from lullaby to urgent plea.

"The Tracks of My Tears" experienced a resurgence in popularity when it was featured in the film Platoon in 1986.  That's about the time I first heard it, too.  My first-ever pop music concert was Smokey Robinson at Wolf Trap in the summer of 1988. 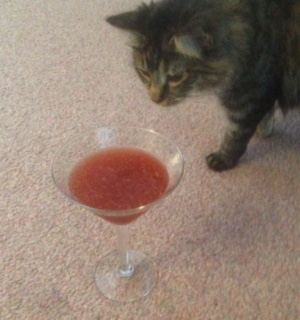 A Robson Cocktail combines dark rum, orange juice, lemon juice and grenadine.  My recipe comes from The New York Bartender's Guide.  I have written before that rum doesn't usually compete well with citrus but it pops out nicely here.

Grenadine, originally produced from pomegranate juice, is now more often made with black currant and/or artificial flavoring.  In mixology, it is used as much for coloring as for taste.