The Armchair Squid turns twelve years old today!  It's time to hand out some hardware.  And the Squiddy goes to... 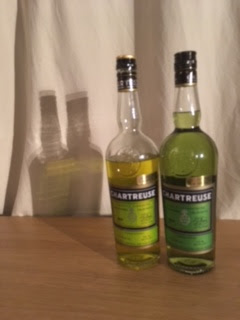 Chartreuse is a liqueur which has been produced by French monks for at least four centuries.  There are two varieties: a sweeter yellow and a more intensely alcoholic green.  The flavor is wild, like psychedelia in a glass.  Different hints are emphasized depending on what it's combined with.  Sometimes anise prevails, other times mint, other times cinnamon, other times... I don't even know what.  It ain't cheap but on the bright side, a little goes a long way.  Without question, it was our most rewarding mixological discovery this year.
Biggest Disappointment: Chadwick Boseman's Passing
Actor Chadwick Boseman passed away last August of complications from colon cancer.  Only 43 years old, he'd already compiled an impressive film resume, having portrayed T'Challa/Black Panther, Jackie Robinson, James Brown and Thurgood Marshall among others.  May he rest in peace.
Best Read, First Time Category: Interior Chinatown by Charles Yu
Yu's novel about the life of "Generic Asian Man" Willis Wu is written in screenplay format.  Willis is an actor - or is he a character? - on a cop show called Black and White.  The leads are a Black man and a White woman.  Willis and all of the other Asians are background characters.  Of course, it's all an elaborate metaphor for the ways race plays out in American society, especially for those of East Asian descent.  While the weaving in and out of "reality" can be a little confusing, that's sort of the point.  Even Chinatown itself is simultaneously the reality and the metaphor for the compartmentalization of Asian culture in the United States.
The time to educate ourselves about race is now.  I can't recommend Interior Chinatown highly enough.
Best Read, Re-Read Category: Harry Potter and the Half-Blood Prince by J.K. Rowling
The penultimate volume of the Harry Potter series is an intensely emotional experience.  Our young hero confronts both loss and love with greater intensity and immediacy than ever before.  The stage is set for the amazing ending.  Good as it is, the final book suffers a little from pacing issues.  So, Year 6 gets my nod in this category.
Best Comics Find: Frank Miller's Daredevil
Daredevil is a fascinating character, one of Marvel's best.  Industry titan Frank Miller started drawing for the series in May 1979.  Eventually, he would take over writing duties as well.  It was his breakthrough gig.  Miller brought darker sensibilities to the medium, both literally and figuratively.  His style was a fine match for an emotionally remote protagonist and his gritty Hell's Kitchen world.
Athlete of the Year: Willie Mays
This summer, I read Willie Mays: The Life, the Legend by James S. Hirsch.  If I'd previously had any doubts about Mays's superiority over all other baseball players in history, Hirsch's book erased them.  Mays turned 90 years old in May.  He's a living national treasure.
Best Family Adventure: Zooming Christmas 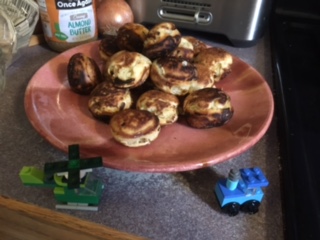 This year, COVID circumstances forced (sensible) people to be creative during the holidays.  Thanks to the ingenuity of family and friends, we enjoyed several of what I hope will become new annual traditions.  English Prof hosted a reading of A Christmas Carol by Charles Dickens for over 30 people from her home in Massachusetts.  My sister and niece organized Jolabokaflod (explained here) for Christmas Eve including 15 people over six households, three US states (plus DC) and two countries.  My wife inspired an Æbleskiver Breakfast for three of those same households Christmas morning.  We connected with her family later Christmas day - five people, three states in that case.  Even under normal circumstances, coordinating any of those gatherings would have been challenging.  Zoom, for all of the headaches it brings, made it all possible.