A Window Above: Solsbury Hill

"Solsbury Hill" launched Peter Gabriel's solo career after a decade as the heavily-costumed lead singer of Genesis.  Not many musicians strike out on their own in order to tone down their image but that's exactly what happened with Gabriel.  He didn't leave all of his eccentricities behind.  All of his first four albums are eponymous and unnumbered.

The song commemorates a spiritual experience Gabriel had atop a hill in Somerset, England.  According to him, it's about letting go - of the band, yes, but of things in general - in order to grow.  For the music geeks out there, the song is written mostly in 7/4 time - highly unusual, particularly in pop music. 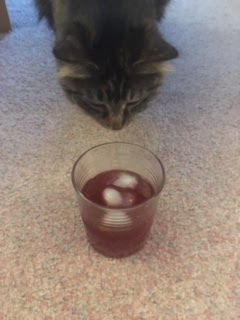 When Ebeneezer Scrooge ladles out punch for all assembled at the end of Dickens's A Christmas Carol, the bowl is filled with hot Bishop.  Bishop was the mulled wine of choice in 19th century England, especially in December.  The obvious way to Americanize the drink was to pour it over ice.  I got my Bishop's Cooler recipe from Eric Felten's How's Your Drink?  Felten got it from a 1947 bar book by "Trader Vic" Bergeron.

A Bishop's Cooler combines fresh lemon and orange juices with Burgundy wine, Jamaican rum and a little sugar.  Not wishing to waste a nice Burgundy, I went with a cheap California Pinot Noir instead.  The ingredients are mixed directly in the serving glass which is handy.  My wife thought it tasted like Sangria.  Not surprising.  Sangria is, after all, a punch with wine and citrus, too.

Posted by The Armchair Squid at 1:00 AM 7 comments:

A Window Above: Tempted


"I fumble for the clock
Alarmed by the seduction."

The lyric above is my second-favorite, all-time (after this one).  The "clock alarmed" wrap around is so deliciously clever.

To me, this is the rare song that exists outside of era.  Maybe there's something in the keyboard sound that signifies early '80s but the basic energy feels older.  Calling it retro is over-simplifying.  It is a genre of one.  It never cracked the top 40 in even one country where it was released as a single, yet it has found its way into the classic canon.

It's not even a typical song for the band, though certainly its most enduring.  Most of Squeeze's opus features Tilbrook at lead vocals.  For most that don't, Difford takes the lead.  Instead, keyboardist Paul Carrack sang lead here.  Interestingly, Carrack was only with the band for a relatively short time, replacing Jools Holland.  Carrack was the lead singer for a couple of other successful acts: Ace and Mike + The Mechanics.  Producer Elvis Costello's voice can also be heard on the song, trading off lines with Tilbrook in the second verse.

An a cappella rendition by The Georgetown Chimes:

Posted by The Armchair Squid at 1:00 AM 2 comments: 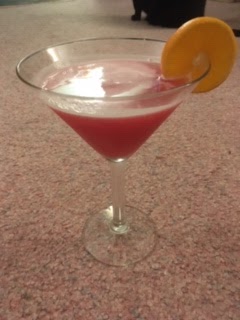 In September 2017, I included a photo of a red-spotted newt with one of my posts.  My dear friend Nancy Mock suggested that the name of this handsome amphibian might make for a good cocktail moniker when I invent my own.  Well, the thrilling moment has arrived.

Shake with ice.  Strain into a cocktail glass.  Garnish with orange slice.


We got a bunch of cranberries with our CSA share and my wife wanted something interesting to do with them.  She made the cordial with the understanding that I would sort out an appropriate cocktail application for it.  I used the sea breeze (vodka, cranberry, grapefruit) as my starting point, then shaped the new drink around the available ingredients.  Fortunately, we still had one grapefruit from our daughter's high school band citrus sale.  I struck upon adding bitters in Trial #2.

The reviews were glowing.  "We need more grapefruit juice so we can drink these all weekend," my wife said.  Every drink book I've read stresses the importance of fresh juice.  I will admit that I usually don't bother but I can't deny that it made a huge difference with these and probably would with others.  One thing that's cool about using fresh fruit:  each drink will taste subtly different because each grapefruit tastes subtly different.  One will be sweeter, another more tangy, yet another more bitter.  Store-bought juice from concentrate is far more uniform.  It'll do in a pinch but fresh is more adventurous.  In an odd coincidence, every grapefruit I tried yielded almost exactly six ounces of juice - perfect for two drinks!

A Window Above: Annie's Song


"Let me drown in your laughter.
Let me die in your arms."

"Annie's Song" came to John Denver while riding a ski lift in Aspen.  It was an ode to his wife at the time, Annie Martel Denver.  Apparently, the original melody matched the second movement of Tchaikovsky's fifth symphony exactly but, in the end, only contained the first five notes.  Here, once again, is the theme of humility in the face of love.

The song has been successfully translated to several languages, including a Finnish #1 hit for Ville Valo:

For the sake of completeness, here's the Tchaikovsky: 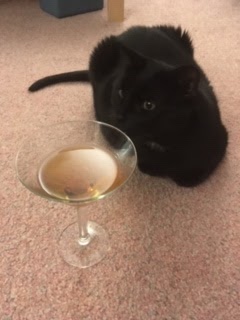 In working through a book like The New York Bartender's Guide, one quickly catches on to the fact that a slight change in recipe - a switch from light to dark rum, the presence or absence of bitters, even a variation in garnish - can result in a name change.  The most frequent such tweak is a change in proportions.  Case in point: according to the guide, 6 parts light rum to 2 parts sweet vermouth is a Poker Cocktail whereas 4:2 of the same ingredients is a Little Princess.  Regarding why one is called by the one name and the other another, I can find no information.  It is just so.

We decided to try the Little Princess, figuring that if we decided what it really needs is more rum, we could try the Poker Cocktail.  As it turns out, less rum is just fine.  In fact, with less one can truly appreciate the vermouth as more than mere sweetener.

A Window Above: Dazed and Confused


"Been dazed and confused for so long it's not true.
Wanted a woman, never bargained for you."

The greatest lyrics in rock 'n' roll.  You hardly need the rest of the song after an opening like that.

The story of authorship for this song is a complicated one.  In the end, it doesn't reflect well on what is probably my second-favorite band (after the Beatles, naturally).   A song called "Dazed and Confused" was first written by Jake Holmes, an American singer-songwriter, in 1967.  The British rockers The Yardbirds reworked a new arrangement for themselves.  Their co-lead guitarist at the time was Jimmy Page who, of course, went on to join Led Zeppelin.  The Zeppelin version includes new lyrics, including the one above, by lead singer Robert Plant (uncredited, interestingly).  In 2010, Holmes sued for copyright infringement.  He won an out of court settlement as well as the parenthetical writing credit indicated above.

Both the original Holmes and Yardbirds version are included below.  Holmes's claim is obviously genuine.  At the same time, there's no denying Plant's lyrics bring depth and dimension to the affair.

Posted by The Armchair Squid at 5:30 AM 6 comments: 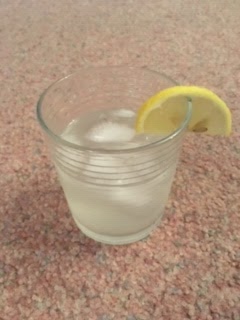 A gin fix is simple enough: gin, lemon juice, sugar, water, lemon slice to garnish.  I got my recipe from Imbibe! by David Wondrich with an assist from The New York Bartender's Guide on the garnish.  According to Wondrich, the first historical record is a drink list from a Toronto saloon, dated 1856.  It's a refreshing drink, tasting exactly like what it is: gin and lemon.