A Window Above: Your Song

The world is overrun with love songs.  Most run along the same basic themes.  But every once in a while - a long while - someone takes a new and refreshing approach.  Nearly 50 years on, "Your Song" is so familiar that it comes across as cliche.  It is anything but.  An awkward narrator stumbles to find the right words to express his love.  Almost by accident, his simple honesty begets magic.  "Your Song" was Elton John's breakthrough hit and for my money, it's always been his best.

Three Dog Night released the song first.  Elton John opened for the band on tour and let them record it.  The song was the first track on his own eponymous album, released just a couple weeks later.  When he put out the single himself, it was merely the B-side to "Take Me to the Pilot."  I am routinely amazed by how wrong people can be about such decisions in retrospect. 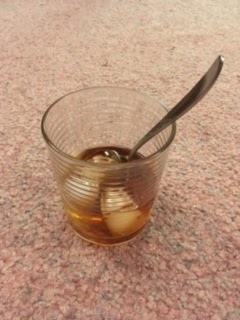 Same recipe as this drink, but with brandy instead of whiskey.  I prefer the latter but the sweetness of the brandy does bring out something awfully nice in the bitters.   It might be worth keeping the recipe, from David Wondrich's Imbibe, in mind for variety's sake.

A Window Above: Let's Get It On

Sexiest song ever?  Quite possibly.  If not, it's on a damn short list.

It didn't start off that way.  Townsend initially wrote it as a religious song after he came out of alcohol rehab.  Then Kenneth Stover changed the lyrics to serve a political theme.  Finally, Gaye and Townsend brought the sex.  The song became the centerpiece and title-track for a sex-themed album, a sharp contrast to the political masterpiece, What's Going On, released in 1971.  The song and the album firmly established Gaye as a sexual icon for the rest of his short life and beyond.  The "Let's Get It On" single was not only his best seller.  It was, to that point, Motown's best-selling record ever.

Vocally, the song may well be Marvin Gaye's magnum opus, exhibiting a breathtaking range of both pitch and emotion.  Indeed, few pop songs of any genre or era can compare.  He is backed on the track by The Funk Brothers.

The song has a sequel on the album, "Keep Gettin' It On": 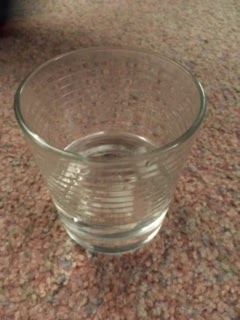 A gin sling could hardly be simpler: gin, sugar, water and ice.  Mix it all in the serving glass.  If you like gin, it's nice and the sugar is just enough to take the edge off.  Perhaps due to the simplicity, slings were extremely popular in the late 19th century.  My recipe came from Imbibe! by David Wondrich.

The Scamp was late for the photo shoot, then wouldn't stick around once she finally showed up.  Cats...

A Window Above: Pastime Paradise

If I have written this before, it's always worth repeating: if you wish to understand modern music, you must know Stevie Wonder's work from the early- and mid-1970s.  His legacy extends to pop, rock, R&B, hip-hop and beyond, both in terms of musical elements and technological innovation.  "Pastime Paradise" was one of the first songs to use a synthesizer to sound like a full string section.  The recording features both a gospel choir and Hare Krishna musicians as chanters and bell ringers.

"Pastime Paradise" has been sampled and covered by numerous musicians, most famously by Coolio in "Gangsta's Paradise": 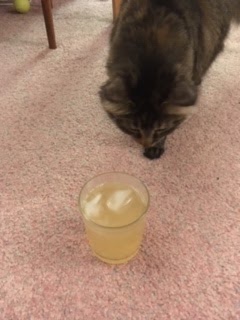 "Colonel" Joe Rickey was a Democratic lobbyist from Fulton, Missouri.  During the 1880s, he invented this simple drink combining whiskey with lime juice and soda then had bartenders make it for him.  Later, people started making the drink with gin, which ultimately became more popular.  But Joe was always faithful to whiskey.

I used bourbon for our drink, as recommended by David Wondrich in Imbibe!, from which I also got the above history.  We've had gin rickeys before and my wife says she prefers it that way.  I like the bourbon.  Gin doesn't stand up as well to mixers as whiskey does.  I like the fact that with whiskey, you always know it's there.  Even if the flavor fades, that warmth in the back of the throat remains.  I can see how the mellow bourbon is the right choice.  A sharper rye, for instance, might clash more with the lime.

A Window Above: Caravan

"Caravan" is one of numerous jazz standards written or co-written by Duke Ellington, the king of all bandleaders and arguably the most important musician in American history.  The exotic sounds were unusual for the era and have certainly contributed to the piece's enduring appeal.  Irving Mills wrote lyrics, though they are rarely performed.

The song has been covered by, essentially, every important jazz musician since.  That's why they're called standards.  There are dozens of recordings by Ellington alone.  It would be absurd to attempt an exhaustive list so I offer only a few of the more unusual renditions.

Ella Fitzgerald with the Ellington Band:

The Mills Brothers, a cappella - not exactly an enlightened piece of flim by 2019 standards but musically, wow:

Gordon Jenkins - Mad Men fans may recognize this one: 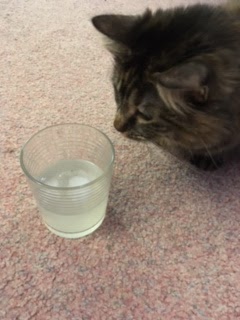 This is the same recipe employed two weeks ago for the brandy sour.  Both came from Imbibe! by David Wondrich.  I will admit to being a little skeptical of the gin, lemon combo but it was fine.  The lemon is dominant enough that there's no clash.  My wife described the result as "almost summery," though that did not discourage her from drinking it in winter.

A Window Above: The Gambler

While on the Paris subway last summer, I made a joke to my wife and daughter that I would ask a group of buskers if they could sing "The Gambler."  This prompted a Google search for the French lyrics.  After all, the internet was invented for just such a quest.  It became a running joke of our trip.

No, I never did get up the nerve to ask them.

Now, "The Gambler" is one of the iconic songs of 1970s country music but it took a while for the song to catch on.  It took two years of shopping around for Schlitz to find a musician to record it.  Bobby Bare took it on at the urging of children's author Shel Silverstein, of all people but never released it as a single.  Johnny Cash gave it a shot, including it on his 1978 Gone Girl album - again, no single.

Finally, Kenny Rogers got a hold of it.  Whereas Cash's star had faded by the late '70s, Rogers was an industry titan.  "The Gambler" was the second of five consecutive singles to hit the top of the country charts for Rogers.  The record even enjoyed what was, at the time, rare crossover success, reaching #16 on the pop charts.  It is most assuredly the song most closely associated with Rogers now and the one most likely to carry his legacy into the future.

As one who's played a lot of poker over the past few years (see here), the advice in the song is good.

How could I not include the Muppets?

No, I never was able to find French lyrics.  But if you're interested, here's a link to a line-by-line translation.