I have reached the end of the main body of the Age of Apocalypse story.  Despite all my griping, it's not terrible.  Faint praise, I know.  But you have to understand how much the story structure drove me crazy: too many characters, too many threads going at once.  Now that I've gotten to the end, I'd rather have read each individual series separately, then read Omega at the end.  But I realize I am not every reader.
I prefer an overly complicated X-Men story to an overly complicated Avengers story.  Even with the cast of thousands, the X-Men franchise is built around a unifying concept in a way that the Avengers are not.  It always comes back to Charles Xavier, even when he's been removed from the narrative, and the mutant/human dynamic.  The characters have defined relationships with each other - enough for some soap opera romance elements, and I mean that in a good way.  The Avengers, on the other hand, always feels like a hodgepodge, a landing platform for every superhero - and villain - they want to keep but don't know what else to do with.  Sure, there's always the core trio: Iron Man, Thor, Captain America.  But even they don't play a prominent role in every story.  What else holds the overall concept together from one arc to the next?
The Fantastic Four?  Reed Richards is way too annoying for them to ever be my favorite Marvel team, even though so much good has come out of FF: the Inhumans, Galactus, Silver Surfer, Jack Kirby's best artwork, the whole Marvel Silver Age philosophy, etc.
I only have a few days left in my Marvel Unlimited subscription.  Expect a wrap-up post next week.
My Recent Reads
Weapon X #4
Cover Date: June 1995
Writer: Larry Hama
Artist: Adam Kubert
The Amazing X-Men #4
June 1995
Fabian Nicieza/Kubert

Episode: "Cost of Living"
Series: Star Trek: The Next Generation
Season 5, Episode 20
Original Air Date: April 20, 1992
Lwaxanna Troi is getting married!  To keep herself amused while en route to meet her intended for the first time, she takes young Alexander Rozhenko underwing.  She encourages the boy to adopt her own carefree ways, directly undermining both Worf's parenting and Deanna Troi's counseling.  Meanwhile, parasites are devouring the ship.
A Lwaxanna episode and an Alexander episode combined into one?  What's more, they're enabling one another's most annoying tendencies?  Oh, joy!
Nope, I'm not a fan of this one.  Worth noting, though, it won two Emmys: costume design and makeup.
Acting Notes
Brian Bonsall (Alexander) was born December 3, 1981 in Torrance, California.  Trek was actually his second high-profile television gig.  In 1986, he was cast as Andy, the youngest Keaton child in Family Ties.  He won three Young Artist Awards for that part.  He made his big screen debut in 1992, starring in Mikey.
Bonsall retired from acting at the ripe old age of 14.  Since then, he's been active as a musician, most prominently as lead guitarist for the Ataris for a few years.  He's had more than his fair share of legal troubles, both assault and drug charges.  He is married with one child, born in 2019.
Posted by The Armchair Squid at 1:00 AM 5 comments: 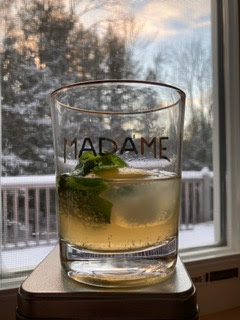 A champagne julep combines cognac, sparkling white wine, simple syrup, bitters and mint.  I got my recipe from the Cocktail Party app.  I used Prosecco for the wine.  The bitters choice offered: aromatic, chocolate, lemon, orange or Creole.  I went with lemon.
We love mint.  We even have some in the garden - easily harvested in warmer months, not so much now.  And we love whiskey.  So, you'd think we'd drink juleps all the time but not so much.  The champagne variation provides a brighter option than the standard - quite nice.  I can't say the bitters were much of a player.  Again, it might be fun to experiment with the different options.
Posted by The Armchair Squid at 1:00 AM 3 comments:

On the Coffee Table: The Memoirs of Sherlock Holmes

Title: The Memoirs of Sherlock Holmes
Author: Arthur Conan Doyle
The Memoirs of Sherlock Holmes collects short stories originally published in The Strand Magazine, 1892-93.  Some but not all editions include "The Adventure of the Cardboard Box."  Mine did not.
There's some decent character development for Holmes in this run.  We learn he is a master of both boxing and fencing.  We learn he has a brother, Mycroft, every bit as brilliant as he is, though not as keen for the fieldwork required of an expert detective.  So he's an accountant instead.  My favorites of the collection are "The Adventure of the Silver Blaze," in which a race horse figures prominently, and "The Adventure of the Yellow Face," in which we see a rare attempt at Victorian Era social commentary.
Most important for the overall franchise is the book's last tale, "The Final Problem."  Holmes's greatest nemesis, Professor Moriarty, is introduced - an arch-criminal whose legacy includes Kingpin, Jabba the Hutt and Keyser Soze.  I like Moriarty and I appreciate his importance but at least in this initial appearance, I don't think he gets enough development.  In fact, to this point, I prefer the Star Trek character.  Worth noting: neither Holmes nor Data could best Moriarty.  But Captain Picard could...
Posted by The Armchair Squid at 1:00 AM 8 comments:

All of those #4 issues below mean I'm getting close to the end of the main story.  So, I'll need to decide whether I want to dip my toe into the prequels or the sequels before my Marvel Unlimited subscription runs out.
My money's on the prequels.
My Recent Reads
Gambit and the X-Ternals #3
Cover Date: May 1995
Writer: Fabian Nicieza
Artist: Salvador Larroca
The Astonishing X-Men #4
June 1995
Scott Lobdell/Joe Madureira
Generation Next #4
June 1995
Lobdell/Chris Bachalo
Gambit and the X-Ternals #4
June 1995
Nicieza/Larroca
X-Man #4
June 1995
Jeph Loeb/Steve Skroce
X-Calibre #4
June 1995
Warren Ellis/Ken Lashley
Factor X #4
June 1995
John Francis Moore/Steve Epting and Terry Dodson
Posted by The Armchair Squid at 1:00 AM 10 comments:

Episode: "The First Duty"
Series: Star Trek: The Next Generation
Season 5, Episode 19
Original Air Date: March 30, 1992
Captain Picard is giving the keynote speech at Starfleet Academy's graduation ceremony.  While the Enterprise is en route, the crew learn that Wesley Crusher's hot shot flight team has been in a horrible accident.  Wesley has survived with only a minor injury, though one of the five-member team was killed.  In the investigation, the superintendent, Admiral Brand, suspects there's more to the story than the cadets are letting on.  She's right.  Will young Wes come forward with the truth?
It's a strong episode, perhaps Wesley's best story.  It's an important one for the future of the franchise, too.  The seventh season episode "Lower Decks" is a sequel of sorts, in turn inspiring the much later animated series of the same name.  "The First Duty" also brings Robert Duncan McNeill into the fold as Nick Locarno, the flight team's leader.  The character provided inspiration for the Voyager principal Tom Paris even before McNeill himself was offered the role.
Acting Notes
Jacqueline Brookes (Admiral Brand) was born July 24, 1930 in Montclair, New Jersey.  She got a BFA from the University of Iowa, then went to London on Fulbright to study at the Royal Academy of Dramatic Arts.
The bulk of her career was on stage.  In fine Trek tradition, her Shakespeare credentials are particularly extensive: The Merchant of Venice, Midsummer Night's Dream and Much Ado About Nothing among many others.  She made her Broadway debut in 1955 in Tiger at the Gates.  Screen credits are relatively modest though she had a four-year run (1969-73) on As the World Turns.
Brookes died of lymphoma in 2013.
Posted by The Armchair Squid at 1:00 AM 2 comments:

On the Coffee Table: Explorer

Title: Explorer: The Mystery Boxes
Editor: Kazu Kibuishi
As with his Flight series, Amulet creator Kibuishi created Explorer as an anthology series to showcase the sequential art work of others along with his own.  Perhaps the lesson of Flight (see here) led him to be more deliberate in establishing a theme for each installment.  Each of the seven stories in The Mystery Boxes involves just that, a mysterious box.  Obviously, each tale takes the idea in a different direction and therein lies the fun.
Most of the contributors are relative unknowns.  However, Raina Telgemeier (Drama, Smile, etc.) teamed up with Dave Roman to create "Spring Cleaning."  I appreciated the Japanese folk tale elements of Rad Sechrist's "The Butter Thief" and the Looney Tunes-esque zaniness of Johane Matte's "Whatzit."  The strongest, though, is Kibuishi's own "The Escape Option."  I find it reminiscent of Vonnegut and the final panel, which closes the volume, is stunning.
Posted by The Armchair Squid at 1:00 AM 2 comments: