On the Road: Arlington National Cemetery 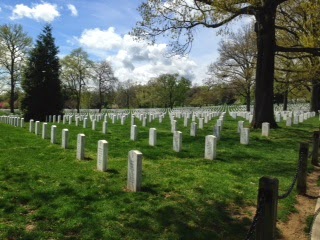 This past week, our daughter and I made our annual April visit to see my parents in Washington, DC.  The Purple Penguin is generally content to hang out with Grandma on her own which means I usually have an opportunity for my own adventures in town.  Despite growing up in the area, there was one major Washington sight I'd never gotten around to visiting: Arlington National Cemetery.  On Monday morning, I set off to rectify that.

Arlington National Cemetery is the most famous military cemetery in the United States.  Contained on the grounds are the remains of two Presidents, 367 Medal of Honor winners and surely thousands of others.  More come in nearly every day, as I was reminded by the white hearse that was leaving as I arrived.  The beautiful grounds are built upon the hill of an estate formerly owned by the legendary Confederate general, Robert E. Lee.  One can hardly help feeling moved walking amidst the endless sea of gravestones remembering those who have served, officers laid to rest alongside enlisted from the Civil War to the present.

Anyone living under the illusion that we live in a classless society would quickly be convinced otherwise at Arlington.  As one moves uphill, the markers get bigger and the ranks more impressive.  One sees a lot more generals and admirals near the top.  Even those with less distinguished military careers gained esteem as senators or captains of industry.  On the other hand, the cemetery's most revered memorial contains the remains of three soldiers who were never identified: 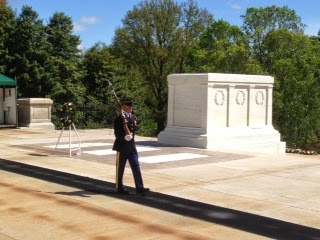 It was a beautiful, though warm day so I wasn't too keen to hunt down grave markers.  However, I did make a point of finding one: 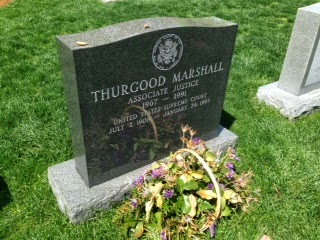 Marshall never served in the military but certainly deserves his place for his extraordinary civilian service to the country.

The gravestones of Medal of Honor winners are marked, though I only saw one: 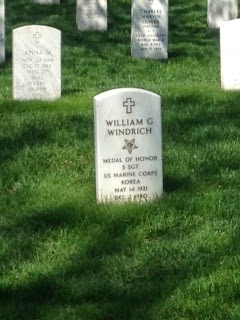 Click here to learn more about Staff Sergeant Windrich, including his award citation.

I am glad to have visited Arlington and recommend it to anyone with time and good weather in the Washington area.  The sun was certainly nice but I could have done with a cooler day.  In the visitor's center, there were some nice wintery pictures of the grounds, suggesting it might be meaningful to go again at a different time of year.