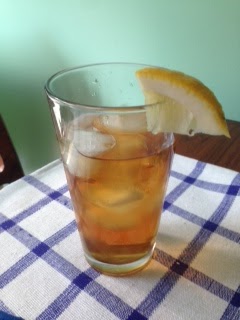 Mixology has become a big hobby for me over the past several months.  Most of my drinks are alcoholic but my daughter, understandably, gets upset if I don't also occasionally throw something together for her to try.  Fortunately, The New York Bartender's Guide (a gift from a friend back in college) has several non-alcoholic recipes.  Shirley Temple (ginger ale and grenadine) has been her favorite, as it was for me as a kid.  I used to order them at Danny's Spaghetti House in Silver Spring, Maryland.  They called mine a Roy Rogers to spare my masculine dignity.

This week's experiment was sun tea:

Put it all in a covered glass jar, set it in direct sunlight for 4 hours. 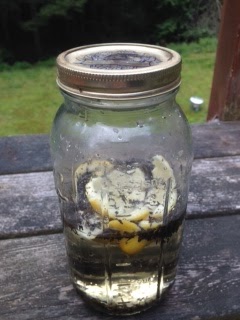 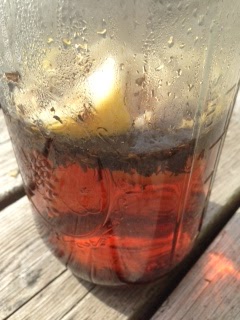 I was impressed by how warm the jar was after four hours.  The tea was good.  My wife and I took ours with lemon, my daughter (aka The Purple Penguin) took sugar.  The Penguin didn't care for it, unfortunately.  I finished hers and while I'm not always a fan of sugar in tea, it did a nice job of bringing out the spiciness in this case.

I don't know if I'd try this again but it was certainly easy.  If I do, I'd likely try a different variety of tea.