There are two restaurants in Vermont which inspire instant salivation for me and both are in Montpelier.  One is Royal Orchid, the best Thai restaurant in the state boasting a crispy duck dish that is just about the most fantastic thing I've ever eaten.  The other is Mad Taco.
We live closer to Burlington than to Montpelier so we are usually more likely to head west than east for our weekend adventures but our charming state capitol has plenty going on for a town of its modest size (smallest state capitol in the US: 7,755 people).  The Savoy is one of the best artsy movie theaters in the state and is currently screening both the animated and live action Oscar-nominated shorts.  On Saturday, we decided to take in both, stopping in at Mad Taco for lunch.

I always order the same thing: kimchi tacos.  I consider being more adventurous but why mess with success?  The restaurant also makes a range of salsas, served in squeeze bottles, rated 1-10 for heat.  I love heat and can say that in my experience, anything rated at 3 offers plenty.  5 is heading towards danger territory.  On this visit, I tried a 3 and a 4, both lovely. 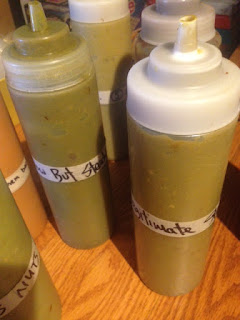 As for the movies, this was our first time seeing the live action ones.  We've been going to see the animated shorts for several years now, figuring they're more child friendly - not necessarily so.  In fact one of this year's animated nominees, Pear Cider and Cigarettes, came with a not-for-kids warning.  Wife and daughter (13) left the theater for that one - last in the program - but I stayed.

All of the nominated films in both categories were really strong - not always the case.  My favorite among the animated ones was Pearl, a six-minute, essentially wordless story about a girl growing up with her single, free-spirited but ultimately responsible father.  Daughter preferred Pixar's offering: Piper.  Wife liked Blind Vaysha, a Canadian-produced parable about living in the moment.  The objectionable aspects of Pear Cider and Cigarettes are many: nudity, objectification of women, violence, lots and lots of substance abuse.  But mostly, it's sad as addiction stories usually are.  The artwork was excellent, as it was for all five.  Any of the five would be a deserving winner.

So too, for the live action works.  My favorite was Timecode from Spain, the Palme D'Or winner for short film at Cannes: two parking garage attendants find a wonderful way to amuse each other.  We all enjoyed Sing, a Hungarian film about a children's choir and poetic justice.  Two of the nominees deal with immigration issues: the Danish Silent Nights and Ennemis Intérieurs from France.  If timeliness is worth anything, Ennemis Intérieurs will win.