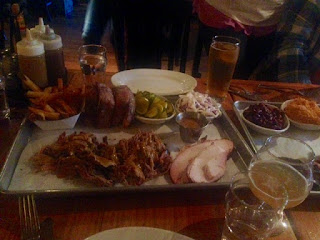 The special menu for Restaurant Week was a "$30 Barbecue for Two" platter with a choice of meats and appetizers.  For our large group, we ordered three such platters so we could sample everything.  I will admit upfront that it was not the most nuanced restaurant meal I've ever had, more like a boarding house dinner with everyone grabbing what they could.  Some got into testing the different sauces but I was just shoveling in the grub.  Mind you, it was loads of fun - just a lot more eating than critiquing for me.  Among the meats, the smoked chicken was my favorite; among the appetizers, the Red Hen Baking Fat-Tire Toast. 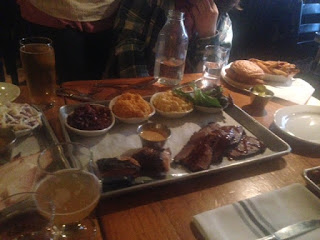