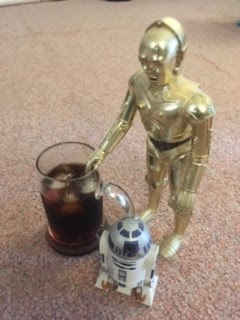 I grew up believing a Roy Rogers was simply a Shirley Temple served to a boy.  That's what the waitresses at Danny's Spaghetti House in Silver Spring, Maryland used to tell me.  Now I know they were just trying to protect my young masculine ego.  They're two different drinks.  A Shirley Temple combines ginger ale and grenadine whereas a Roy Rogers swaps the ginger ale for cola.  I got my recipe from Mocktails by Kester Thompson.  Don't know if you can quite see it in the photo but there's a cherry garnish in there, too.

Naturally, the drink is named for the King of the Cowboys:
So, why the droids?  Well, you see, I made them for my daughter and me for our Star Wars binge on the last day of our spring break.  The movies were her idea.  The Roys were mine.

The drink is fine.  The flavors don't combine as nicely as ginger ale and grenadine.  One tastes a little fruitiness but the cola overwhelms.  You don't get the color effect either.  Maybe more grenadine would have made more of a difference but not sure it's really worth it.