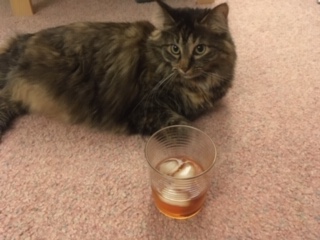 Last week's Hunter's Cocktail was highly successful in that my wife asked for the same a few days later.  I'm always happy to take requests, though I had in mind a couple of variations.  One was out of necessity.  I only had rye enough for one drink so the second would have to be bourbon.  Also, I wanted to include Angostura bitters this time.

A rye, bourbon side-by-side comparison is always meaningful.  My wife definitely preferred the rye and chose that one as hers.  The bourbon felt bigger, more bitter perhaps.  I went with one dash of the bitters for each and didn't really taste it - might try two next time.  It might also be interesting to toy with the whiskey/brandy proportions so as to bring out more cherry flavor.  I don't mind the whiskey taking prominence but it might distinguish the drink more from others with a stronger cherry flavor.

Now the question: does altering the ingredients change the name of the drink?  In this case, I would say no.  Looking online, I found Hunter Cocktail recipes with bourbon and with bitters, though interestingly orange rather than Angostura - something else to bear in mind for next time.

It did make me wonder, though, is there a word for a bitter hunter, one who didn't come back with anything to show for his/her efforts?  I couldn't find such a term.  Does anyone know of one?