The sidecar cocktail was invented during World War I.  The history is a bit murky as to where exactly but either London or Paris.  In the beginning, the recipe called for Cognac, Cointreau and lemon juice, though variations since have allowed for other brandies and other orange liqueurs.  At our house, we have generally favored Robert Simonson's recipe from 3-Ingredient Cocktails.  He likes the original combo.  The International Bartenders Association (IBA) standards, on the other hand, stick by the Cognac but allow for the more general "triple sec."  For our experiments, I am choosing to keep our usual Cognac as brandies in a comparable price range are generally sweeter and we don't want that.  As with The Champs-Élysées, I also have no desire to fuss over lemons.  So, that leaves the orange flavoring...
Orange Liqueur Battles: Cointreau vs. Grand Marnier
We begin with the heavyweights.  Cointreau is produced in Saint-Barthélemy-d'Anjou, France.  The Cointreau brothers Adolphe and Edouard-Jean began selling their orange liqueur in 1870.  In 1990, the family-owned company merged with Rémy Martin to form Rémy Cointreau, a publicly traded entity.
Grand Marnier's first distillery was built in 1827 in Neauphle-le-Château, France.  The current flagship product was first produced in 1880.  The brand is now owned by the Campari Group in Italy.
Head-to-head, Grand Marnier is simply more orangey, both in color and flavor.  It is smoother and the combination with Cognac is less baby aspriny than one gets with Cointreau.
Winner: Grand Marnier
Orange Liqueur Battles: Grand Marnier vs. Bols Triple Sec
Bols has been our preferred lower-shelf triple sec for some time.  The Dutch company claims to be the oldest distillery brand in the world, extant since 1575.  The triple sec is but one of 30 different flavors produced.
We both preferred Grand Marnier - simply more flavor by my reckoning.  Interestingly, my wife said she prefers the Bols to Cointreau: less harsh.  I feel with a gentler orange flavor in the Bols, more of the lemon comes through - not a bad thing.
Winner and Champion: Grand Marnier
So, here's our Sidecar All-Star Team:
Salignac Cognac
Grand Marnier
Lemon 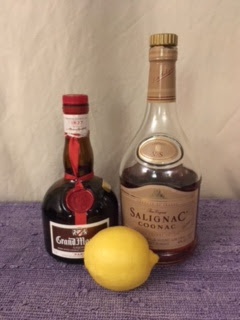 Next up: Bronx Cocktail
Posted by The Armchair Squid at 1:00 AM