My Football Fantasy: The Journeyman 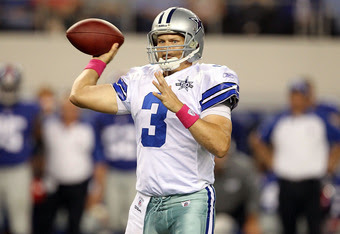 Just one week to go for me in each league. I was within range in the Vermont league going into the Sunday night game. A bigger game from Danny Woodhead (running back, Patriots) would have done it for me but no such luck. In the Iowa league, it was already over for me after the Sunday games. My opponent had the lead with Julius Peppers (defensive end, Bears) still to go on Monday night.

Even though he had his great game at the expense of my team, the Redskins, it's hard not to love the Jon Kitna story. For starters, he is one of very few players in the league who is older than I am. The guy played at an NAIA college, went undrafted in 1996, played in Europe for a year and has since put together a 14-season NFL career. He's spent most of that time in the relative NFL backwaters of Seattle, Cincinnati and Detroit. Tony Romo goes down with an injury and here Kitna is playing lights-out football for the league's most glamorous franchise.

Posted by The Armchair Squid at 12:01 AM