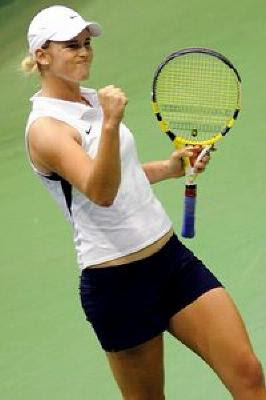 Photo via TENNIS in DEPTH

Glatch was a very successful junior player, winning the Easter Bowl and the Orange Bowl, making the US Open final in both singles and doubles and attaining a world junior ranking of #5.  Her senior career has yet to take off.  It's been a decent week in Paris, though, reaching the second round for the second time.

Catching Up with Old Friends

Juan Carlos Ferrero (Curtain Call, US Open Day 8) - It can't be easy to be Ferrero at Roland Garros.  He won this tournament nine years ago.  He'd made the finals the year before that and the semis the two years before that.  At the time, he sure looked like the emerging dominant force in clay court tennis.  Then there were many injuries.  And then, of course, Nadal came along.  What's it like for him on the grounds now?  How many people still remember?  I will always have a soft spot for Ferrero.  I'm glad he's still playing at 32.  Alas, he fell to Marin Cilic (Croatia, 21st) today on Court 7.
Posted by The Armchair Squid at 10:46 PM