On the Coffee Table: Nausicaa

Title: Nausicaä of the Valley of the Wind, Volumes 1-5
Writer and Artist: Hayao Miyazaki

Our family's love for comic books and Miyazaki films has converged nicely upon the original manga version of Nausicaä of the Valley of the Wind - translated, of course.  I reviewed the film version of the story here.  In the same post, I also explain the interesting role this story has played in Miyazaki's extraordinary career.

Over the past two months, I have read the first five collected volumes of the series out of seven total.  The film only covers the first volume and some of the second.  Obviously, in the manga, Nausicaä's world is far better developed. 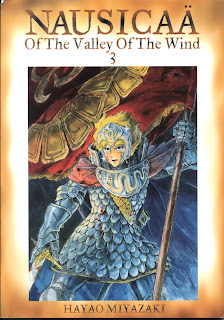 In the movie, a war between the Torumekians and the Doroks is just beginning.  In the manga, we get the gory details and things get bad in a big hurry.  The Doroks initiate environmental warfare which ultimately leaves the land uninhabitable - for themselves as well as their enemies.  Nausicaä, princess of a peripheral tribe, is the savior figure, capable of communicating with animals - especially the enormous insects of the forest whom the rest of humanity have learned to fear.

Apocalyptic narratives are fairly common in Japanese sci-fi and fantasy, for obvious historical reasons.  Miyazaki's twist is an interesting one in that the disaster is self-inflected, a fictional worst-case extrapolation of real world problems.  Nausicaä has all of the expected hero qualities: intelligence, decisiveness and bravery.  However, it is her compassion which separates her from the powerful warriors around her and which is the key to her finding the answers to - hopefully - save her world.

I say hopefully because Nausicaä's predicament at the end of Volume 5 seems dire indeed.  With two more volumes to go, though, there's still time for a happy ending.

Posted by The Armchair Squid at 7:32 PM