Image via Wikipedia
For the first time, Latvia is playing host for the World Women's Curling Championship.  This year's championship is one of three qualifying events for the 2014 Winter Olympics.  The top seven nations in the qualification standings after this event will automatically qualify for the Olympics.  Switzerland currently leads those standings with Canada in third place and the United States in fifth.

Two of the skips in this year's competition have won world titles before: Andrea Schöpp of Germany and Wang Bingyu of China.  Both should be considered among the favorites. 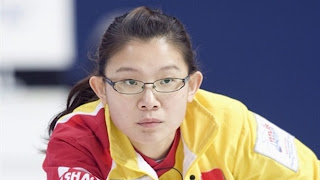 One might expect Russia, already qualified for the Olympics as host nation, to be less motivated than the other participating nations.  However, the rink led by Anna Sidorova are the reigning European champions. Canada is nearly always in the mix so expectations are high for the Ottawan team led by Rachel Homan.

The American representatives hail from Madison, Wisconsin.  Skip Erika Brown has won the US national title seven times.  She is a former Olympian, having served as Third to Lisa Schoeneberg at the '98 Nagano Games.