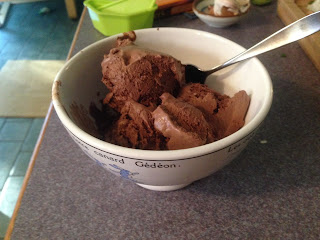 I had planned to make a lot more ice cream than I did this summer, perhaps even a batch or more a week.  I'd never made it by myself from scratch before and wanted to learn.  Of course, I got busy with other things so in the end, I only made three batches, all from David Lebovitz's The Perfect Scoop.  The creation above is from his Chocolate Ice Cream, Philadelphia-Style recipe.

A basic, non-custard ice cream is wonderfully easy, especially if you have a good machine and we do.  The batch turned out well, though certainly rich.  My daughter couldn't even finish hers, though she asked for more the next day (sadly, all gone).  In truth, I'm not such a fan of chocolate as an ice cream flavor.  Don't get me wrong, I'm a huge fan of chocolate generally but not always in ice cream, because of the richness.  Still, I don't think one can reasonably claim to make ice cream without having a chocolate recipe in his/her repertoire.

The best frozen dessert I've eaten recently, though, was a strawberry balsamic sorbet at Hen of the Wood, an elegant restaurant in Waterbury, Vermont.  My wife and I went for a date while our daughter was off visiting her grandparents.  It was a wonderful meal and it came with a story...

Seated next to us were U.S. Senator Patrick Leahy, and his wife Marcelle.  The couple were evidently celebrating their wedding anniversary.  This was actually my third chance encounter with our esteemed senior senator and I had, in fact, been thinking about the other two times on the way to dinner.  At one point, his phone rang and when he went to turn it off, his wife said, "But it might be someone important!"  My imagination raced as I saw him firing off a text to whomever had called, pondering who might be worthy (or not) of taking time away from his wife.
I don't believe in bothering famous people unnecessarily but as we were getting up to leave, we passed on our well wishes.  My wife recommended the sorbet to them.  After praising all of the restaurant's offerings, the senator told us a joke: