We are planning to spend Thanksgiving with the English Prof and the Playwright.  A nautical theme is in the works so I have been experimenting with rum-based cocktails in anticipation.  I got this recipe from The New York Bartender's Guide: light rum and dry vermouth in 6:1 proportion.  It is essentially a martini with rum instead of gin, skip the olive.  I'm assuming it was named for Havana Club rum, a Cuban brand and one of the best selling rums in the world, though not in the United States.  Because of the trade embargo, Havana Club has been banned in the States since 1960.  Rest easy.  I used Bacardi.

I thought it was alright but my wife didn't care for it.  "Too rummy," she said, "and a bit oily."  I guess that tells me plenty, really.  I was hoping for a drink that would showcase the rum itself but obviously that's not going to suit her.  Fortunately, we have another idea to try soon that I expect will be more in line with her tastes.

I forgot to take a picture before drinking mine.  So, here is a photo of a red-spotted newt instead: 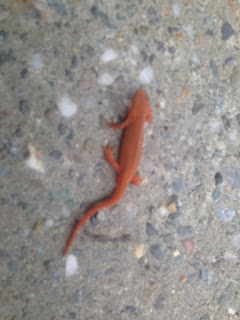