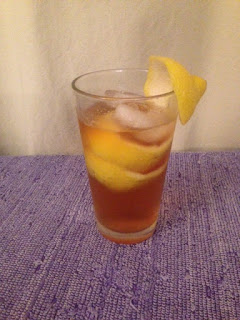 This one is seemingly all about the garnish, a long strip of peel from a single lemon, the end draped over the rim.  The drink itself is basically a highball: blended whiskey, ginger ale, Angostura bitters. Quite tasty, though the garnish is too much work.  In pictures I've seen, the strip is longer and thinner.  With practice, I'm sure I could learn but it doesn't seem worth it.  My recipe was from The New York Bartender's Guide.

The drink dates back to at least 1890.  Originally, it was a non-alcoholic beverage.  Brandy or bourbon was added by the 1910s.