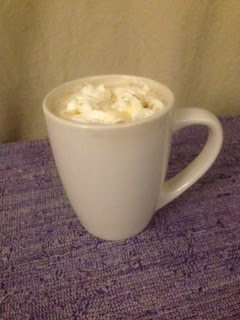 Canadian Coffee is essentially a variation on Irish Coffee.  The recipe I used is by Charmie777 at Genius Kitchen.  It combines whiskey - I used Canadian, of course - with coffee and maple syrup as the sweetener.  The whipped cream topping is optional.  I think it's a winner for our Christmas cocktail as it is yummy and it meets everyone's dietary restrictions.  We'll just have to make cocoa separately for the kids.

The drink isn't too strong.  One doesn't even taste the whiskey, really.  Doesn't knock you out the way some of the other recipes we've tried do, either.  We tried it with regular coffee but we'll use decaf over the holidays.  I think as long as we can find a pleasant tasting one, it should be fine.

I used Vermont syrup, of course, though I'll try to track down a Quebecois product for the drink.  Blasphemous?  A little.  Don't tell my neighbors.  Here's the shocking truth, though, folks: Quebec is actually, by far, the world's largest maple syrup producer accounting for 70% of the total market.  I won't concede that they make the best syrup.  But there's no denying they make the most.