Welcome one and all to the Cephalopod Coffeehouse, a cozy gathering of book lovers, meeting to discuss their thoughts regarding the works they enjoyed most over the previous month.  Pull up a chair, order your cappuccino and join in the fun.  If you wish to add your own review to the conversation, please sign on to the link list at the end of my post. 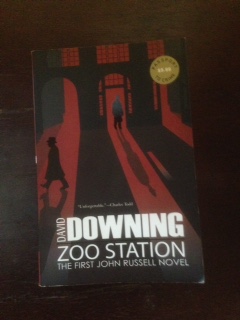 Zoo Station is the first in a series starring John Russell, an English journalist living in Berlin.  We join his story in the late 1930s.  Hitler's hold over central Europe is already increasing and only the most optimistic doubt that war is looming.  While most ex-pats are trying to find a way out, Russell is reluctant to leave his eleven-year-old son, who lives with his German ex-wife.  Meanwhile, the intelligence services of three different nations are working to recruit him to their cause.

Zoo Station is unusual as a spy narrative goes.  First, Russell is an agent rather than an operative.  Le Carre's George Smiley is an operative, in the direct employ of the British Secret Service.  It is Smiley's job to recruit agents, those who would provide him with sensitive information.  Russell is an appealing agent for the British, Russian and German operatives because of his job, his bilingualism and his ability to travel freely.

Downing's research is meticulous, providing a vivid portrait of prewar Berlin.  In fact, all of the book's settings are richly detailed: Krakow, Prague, Kiel, London, Sachsenhausen concentration camp, etc.  The author also effectively paints the mounting tensions inherent in life under Nazism, especially among the Jews, homosexuals and developmentally disabled.  Russell's compassion for the oppressed is strong but sorting out his own place in the mess is an understandable challenge.  Overall, the story's human elements are all strong.

The cloak and dagger tale is rather lacking in elegance, though I like the fact that tension rises at seemingly mundane moments, like waiting in a car at a train station or in the customs line at a border.  Part of le Carre's genius is conveying the soul-breaking tedium that predominates intelligence work.  Russell's adventure moves a little too quickly to be believable.  That said, I'm definitely up for more.

Please join us and share your own review of your best read from the past month.  This month's link list is below.  I'll keep it open until the end of the day.  I'll post May's tomorrow.  Meetings are the last Friday of each month.  Next gathering is May 25th.