On the Coffee Table: Kafka on the Shore 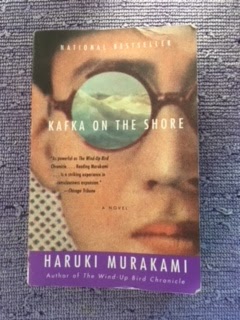 Kafka on the Shore is really two stories intertwined.  In the first, teenage Kafka Tamura runs away from home in Tokyo to escape a difficult relationship with his father and find his long-lost mother and sister.  In the second, the aging Nakata follows a calling of his own which he doesn't even understand.  Both paths lead to Takamatsu on the island of Shikoku, a city I have visited myself.  Unfortunately my most prominent memory of the trip was getting brutally ill.  Kafka's story is a mix of Sophocles and John Irving with a touch of surrealism.  Nakata's is that of Buddhist pilgrimage.

A library plays a prominent role in the novel, particularly Kafka's thread.  Libraries have become a big thing in our family, too.  Our daughter (14) went on a job shadow at a local college library.  Historically, she has been shy about expressing dreams for her own future but walking into that big building entirely devoted to books was definitely a wide-eyed, cathedral moment for her.  We just got back from a family trip to Europe and libraries were a major theme, along with oysters and ice cream.  We visited four in total: the British Library and the Wellcome Collection in London; the National Library of Scotland and the Scottish Poetry Library in Edinbrugh.

Music is important to the book, too.  Nakata's disciple Hoshino, a truck driver by profession, has an unexpected love affair with Beethoven's Archduke Trio.  Kafka listens to loads of different music over the course of his story but Schubert's Sonata in D Minor gets the deepest discussion.

Definitely a fun read and my favorite Murakami so far.  The story is weird but not over the top - just enough to draw you away from realism from time to time.  Not as much eye-popping prose as in Hard-Boiled Wonderland and the End of the World (reflection here) but I found Kafka more captivating.