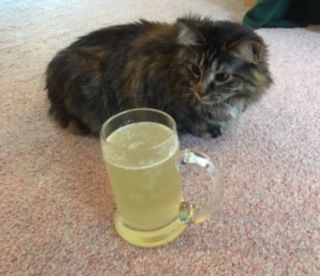 A ginger beer shandy is a simple ginger beer, lemonade mixture in equal parts.  I got my recipe from Liz Scott's Zero-Proof Cocktails.  In flavor, the result is more a sweeter ginger beer than a spicier lemonade.  We enjoyed it but we all agreed it was not an improvement upon either ingredient.  I suggested that perhaps fresh lemonade would make a difference but my wife countered that the lemonade would still be better on its own.