For the first time in my life, I am making an active effort to lose weight.  It is sort of a couple's project for my wife and me, though so far the only thing we're both doing is weighing in each week.  I am by no means huge but I have put on about 50ish pounds since I was a scrawny teenager in the early '90s.  So losing some, while not doctor-mandated, is probably a healthy choice in the long run.  For now, I'm working on establishing healthier habits as opposed to dieting per se.  The trouble with diets, as I see it, is that most people can't wait to get off them and go back to their usual routines, thus putting the weight back on.  Instead, I would like to gradually change my normal and see where that gets me.

I began in earnest in March.  Since my original weigh-in, I have lost 7.5 pounds (3.4 kg for you sensible metric types).  While there have been a couple of spikes, they've only been temporary and this new number - let's call it B-7.5, B for baseline; so baseline minus 7.5 lbs - has become my new floor.  The good news is that I have managed this modest loss with only two deliberate lifestyle changes: being more diligent about exercise and drinking more water.  The bad news is that if I'm going to go any lower, I'm going to have to tackle the much fiercer beast: food.  Let's celebrate the good first.

I'm a FitBit fiend.  Mine is a FitBit One and I generally afix it to a belt loop.  My goal right now is a green screen every day: 10,000 steps, 5 miles, 10 floors and 30 minutes.  The screen turns green if I make them all.  Or at least, it did until FitBit recently updated its phone app.  It still does a little fireworks show celebration but I liked the green screen better.

So far, things are going really well, though I know from past experience such habits set in summer can be really tough to keep up through a Vermont winter.  My default exercise choice, you see, is a long walk in our neighborhood.  It's a gratifying hobby.  We live in the woods and even on a rotten day, Vermont is still one of the most beautiful places in the world.  Partly as an incentive, and partly as a way to keep myself honest, I take photos during my walks and post one on social media each day, like this one: 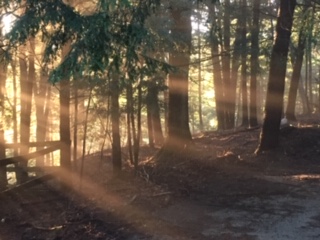 In so doing, not only am I getting the exercise but I'm also going outside everyday, gaining a better appreciation from my surroundings and connecting with friends - wins across the board.

But some days are definitely easier than others.  In June, I felt as if I could point the camera (my phone, of course) in any random direction and catch dazzling colors.  Early spring, aka Mud Season, was a lot tougher.  I can bank on foliage season once it hits but after that?  It's a long, monochromatic winter.  Days will get shorter and I won't have as much time, especially during the work week.  Our private dirt road will get icy - treacherous for driving and, if anything, worse for walking.  And, of course, it will be brutally cold.  Hibernation instincts are powerful.  I don't worry so much about the exercise itself.  Even jogging in place is better than nothing and FitBit happily counts the steps all the same.  But with fewer opportunities to take pictures, I worry about losing the meaningful incentive they have provided.  Even so, I have time.  Perhaps I can find a meaningful indoor incentive to take the place.

Water is, so far, the only food habit I have addressed meaningfully.  I aim for 64 ounces per day, the recommendation for my body weight.  It's hard work.  But, apart from being a generally healthy habit, it also helps with appetite.  Often, when you think your body is telling you it's hungry, it's actually thirsty.  Miraculously, water fulfills a basic biological need and it has zero calories.

Food is going to be tough.  As my blog clearly suggests, I adore food.  It is my favorite hobby of them all.  Learning to eat less feels too much like learning to love less.  But maybe it will be less painful if I can look at it as eating more sensibly - establishing new habits just as I have with the exercise.  Thoughtfulness as opposed to systematic deprivation.

I need to learn more, about food in general and my own current tendencies.  I love dummy books and the like so I invested in one: Weight Loss Kit for Dummies by Carol Ann Rinzler.  Part V of the book is entitled Lifelong Weight Control.  It seemed a perfect place to start.

One of many suggestions Rinzler makes is employing a "food trigger tracker" to gauge when you're snacking.  I tried it this past week.  Fortunately, it would seem I don't snack as often as I might have guessed - or at least, I don't when I'm paying attention.  Even so, I have identified a few of my vulnerable moments: being stuck in a long meeting; doing a long, tedious chore; getting home from work (big one) and after exercise (notable yet understandable - and maybe forgivable?).  I also have a couple of enablers in my life who will occasionally put irresistible food in front of me.  One is a colleague, one is (sorry, Honey) my wife.  Yes, I know I can say no.  But I rarely want to.


Being hungry is no sin, nor is eating when you are.  The key, instead, is to make healthier choices in one's snacks: grabbing an apple instead of a box of crackers, for instance.  I have a lifelong passion for fruit, a passion I'm counting on to save me from another one, just as potent: baked goods.  In her Part of Tens, Rinzer supplies a list of diet-friendly foods, including a few surprises: water (huzzah!), skim milk, cantaloupe, tomato, lettuce, onions, grains (sadly, this does not include fluffy, gooey pastries), chicken breast, tuna fish and chocolate.  That's right, chocolate!  This is an especially helpful discovery in regards to my enabling colleague whom we shall call French Teacher.  She always has chocolate and she favors the really good European stuff.  Dark chocolate is best for my current purposes and I have told her so.  So far, she has been most accommodating.

Yes, I know, still best in moderation.  But it's a better choice than the Japanese rice crackers she knows I adore and which she also always has in ample supply.  Even an enabler can be diffused.  I think I can manage similar adjustments in other circumstances as well, especially at home.  My wife manages the shopping list but she is happy to take requests.

Next, I want to approach my meals differently.  For years, I've taken a light breakfast, medium lunch and a heavy dinner.  This is, of course, the exact opposite of what one is supposed to do so I want to work on inverting that, beginning with more at breakfast.  Apart from being generally healthier, I figure it might also help prevent my feeling famished by the time I get home from work.

So, I have a lot to work on - definitely a long-term, challenging project.  I'll keep you posted.  My history has taught me one very important thing about blogging: it helps to keep me honest.