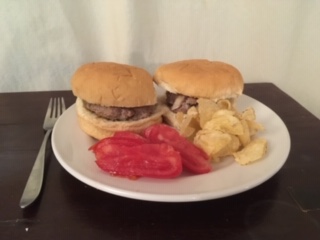 I have been given Tuesdays.  My wife cooks dinner nearly every evening, mostly because she's better at it but also because she finds it relaxing after work, or so she claims.  But Tuesdays have become complicated.  Our daughter's clarinet lessons have been moved an hour later, so ideally we should eat before we leave.  The best solution for making that work: dad cooks.  I welcome the idea.  It's a fine opportunity to hone some of the quicker recipes I have already tried in Mark Bittman's How to Cook Everything: The Basics and also implement the food choice thinking I've been doing in my weight loss efforts.

I asked my daughter if any of my recent efforts were especially appealing for her.  Burgers were her choice (see post here) so I tried not one but two of Bittman's suggested variations: pan-cooked and seasoned.  In all honesty, though, I took the pan option without thinking about it, simply being my more usual choice for hamburgers.  Next time, I might go back to the broiler, though with a shorter cooking time.  I like the crust on the outside but I also like the juicy middle - delicate balance.

As for seasoning, I tried two: oregano and basil.  I first had oregano in a burger at the St. Clair Broiler in St. Paul, Minnesota.  I lived in St. Paul for a year after college and the Broiler was a decent dinner option within walking distance of my apartment.  The place closed in 2017 after 61 years in business.  I haven't been to Minnesota in over 20 years but I've never forgotten those burgers.  I simply mix it in with the meat and onions before cooking.  We had some fresh oregano which I'd never cooked with before - worked just fine.  The basil was a new wrinkle, suggested by Bittman.  At my wife's urging, I added it fresh at the end rather than cooking it with the rest.   I wouldn't say it added much, at least not in competition with the oregano.  I think I might try curry powder next time.

Domaine du Somail, Le Vin de Plume Minervois Red Blend, 2017
My Rating: 8.0
A little of the cat pee smell - yes, I know that sounds gross but it's actually a common description for a young wine.
Tart apple
Astringent
Sacramental finish
My wife presented it as one that might appeal to me in my quest for the idea (see here).  It certainly opened with promise but then didn't take me very far.  Good.  Not great.