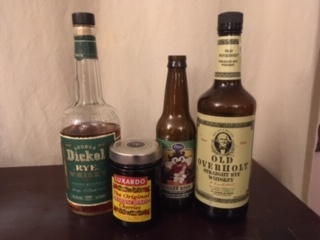 We picked up a bottle of George Dickel rye this weekend in order to commence side-by-side comparisons.  Dickel is the challenger in this case, the defending champ our long-standing favorite, Old Overholt.  Three rounds: the Manhattan Test, the Highball Test and the On the Rocks Test.  Important weigh-in factor (can you tell I'm reading a boxing book right now?): the Dickel costs $8 more for a 750 ml bottle.  However, it is on sale this month.  So if it is better, is it $8 better?  Or is it wait for it to go on sale better?

An important bias going in: my wife recently learned, or just recently told me, that the Old Overholt formula changed when Beam Suntory took over the label.  Basically, it's not much of a rye anymore.  There's only enough rye wheat in the recipe now for it to qualify as such.  Dickel, on the other hand, is 95% rye.  The bottle claims that's one of the highest percentages on the market.


On the Rocks Test

This was the last round we performed but it seems appropriate to begin the narrative here.  My analysis, beginning with the reigning champ...

Old Overholt is smoother with a more floral flavor and a bitter finish.  George Dickel is darker in color, a touch more reddish.  It's bigger, with more dimension.  There's more of a burn, probably due to the higher alcohol content.  The taste is sharper, spikier, though that was more evident in the Manhattans than it was drinking it straight.  Both whiskies had a sweet aftertaste, though the Dickel expressed more vanilla.

My wife wanted a blind test for each.  She is the supertaster, after all (see here) and tasting is actually part of her job.  She was able to pick out the Dickel each time and for me, too, this is the test in which the differences were most evident.  That sharpness came through most pleasantly, not unlike rye bread.  I'm not sure it would be for everyone and to be completely honest, I don't know if I'd want my drink so sharp all the time.  But it's certainly fun for variety.  Forced to choose, I would have to say that yes, the Dickel Manhattan was superior.

Side note: we also tried Luxardo cherries with this most recent round of Manhattans - lovely indeed!  Are they worth four times the cost of a cheap jar?  Probably not.  But they're fun to try.  If nothing else, they've furthered our curiosity about making our own.

With a strong flavor heavyweight such as ginger beer to compete with, neither of us could taste much difference in the whiskeys.  The lessons here: where highballs are concerned, picking the right ginger beer mixer is the more important consideration.  We used Otto's this time as it's what we had on hand.  It's fine but a little too sweet.  As for the whiskey, no it's definitely not worth spending more if you're only going to use it to make highballs.

George Dickel is the more interesting rye whiskey.  There is simply more flavor and I like flavor.  I would say it's wait until it's on sale better.  My wife concurs.