Bitters of the Month: Angostura

Introducing a new series for The Armchair Squid: Bitters of the Month!

Bitters are the wonderful and mysterious third leg of the traditional cocktail combo.  You start with your base liquor: whiskey, vodka, gin, etc.  Then you add your sweetener: often fruit juice, vermouth or a liqueur.  Finally, a dash or three of a concentrated elixir descended from the apothecary's cabinet.  The tiny 4 oz. bottles with the oversized labels are essential bar supplies for the professional and hobbyist alike.  They add the signature accents to such classic drinks as the Manhattan, the Old Fashioned, the Zombie, the Sazerac and many others.  Bitters collecting can be a satisfying sub-hobby in itself and it's not so complicated to make one's own.  (I don't think I'm heading in the latter direction just yet but you never know.) 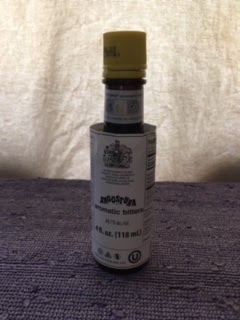 We begin with the old workhorse, Angostura aromatic bitters.  The product was invented by Johann Gottlieb Benjamin Siegert, a German surgeon general in Simon Bolivar's army.  Siegert first started selling it in 1824.  While the bitters were originally produced in Venezuela, the company has been based in Trinidad since 1875.  Gentian root is the primary flavoring, though the exact recipe is a closely guarded family secret.  Only one person knows the full formula.  It used to be two and they famously weren't allowed to fly together on the same plane for fear both would be killed in a crash.

To kick off the month, I feel it's important to isolate the flavor of the bitters, not always easy in the context of a cocktail and tasting the stuff straight is too overpowering.  I think the best way to manage it is with a Gin and Bitters (read here).  Gin is a particularly nice liquor, in my experience, for enhancing rather than hiding or diluting other flavors.

My wife and I sensed the following characteristics in Angostura bitters:
We'll move on to a particularly bitters-heavy cocktail next week. 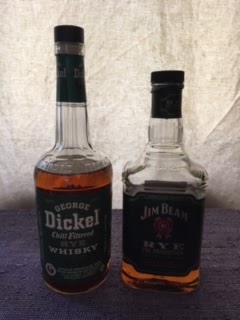 With our current $20-30 range champion rye, George Dickel, on sale this month, it was a good time to pit it against the ranking challenger, Jim Beam Pre-Prohibition.  I have decided the Manhattan Test is the only one we really need to determine a winner moving forward as it's the most likely way we'll both consume rye.  The results...

Mixed.  My wife preferred the Manhattan with George Dickel but I preferred the Jim Beam.  The difference to my mind: the Dickel is more bitter, the Beam more fruity.   At full price, the Jim Beam is $2 cheaper.  However, the customer is always right.  So, while I don't think my wife would turn up her nose at a Manhattan made with Jim Beam, there can only be one winner.