Bitters of the Month: Hella 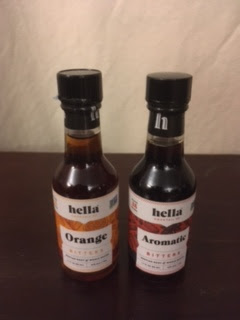 This month, rather than testing flavors, I'm testing brands.  Hella bitters are produced by Hella Cocktail Company, based in Long Island City, New York.  As a gift, I got small bottles of their aromatic and orange bitters.  Obviously, head-to-head matchups would be required.
Aromatic Bitters Battle: Angostura vs. Hella
Obviously, Manhattans were the way to go here.  In fact, there is a recipe on the Hella bottle, though I stuck to my own proportions.  Both were perfectly nice.  The Hella was fruitier.
Winner and New Champion: Hella
This is no small upset, folks.
Orange Bitters Battle: Regan's vs. Hella
For this one, I followed the Old Fashioned recipe on the Hella bottle.  It wasn't exactly an equal fight.  The Regan's bottle yielded bigger "dashes" than the Hella bottle.  Well, that's on them, right?
My wife didn't taste much difference anyway.  I sensed more orange from the Regan's than the Hella but that might not have been the case if I'd been more precise.  Oh well.  All else being equal, the cheaper product wins.
Winner and Still Champion: Regan's
Posted by The Armchair Squid at 1:00 AM