Episode: "Reunion"
Series: Star Trek: The Next Generation
Season 4, Episode 7
Original Air Date: November 5, 1990
Captain Picard, quite surprisingly and controversially, is chosen to arbitrate the selection of the new Klingon leader.  There are two candidates: Duras and Gowron.  One of them, however, killed K'mpec, the previous leader, slowly poisoning him.  Picard must discover which before making his decision.
But wait, there's more.  K'Ehleyr is back and she has a son, Alexander.  What's more, Worf is the father and this is the first he's learned of the child!  Our favorite security officer takes on a lot in this story: reconnecting with his ex, encountering Klingons for the first time since his discommendation, gaining a son and almost immediately taking on primary responsibility for him, leading an investigation of a bombing attack, grieving the loss of his ex, avenging her murder and disappointing his captain.
Question: Are there babysitting services on the Enterprise?  At one point, it seems like Worf and K'Ehleyr leave Alexander by himself.  Maybe they made arrangements off camera?  Or is this part of a broader pattern of neglect?  Or simply a narrative oversight?  (Children are often "forgotten" on television)
Obviously, this is one of the more important Worf stories in the series and, frankly, one of the most significant Klingon tales in the whole franchise.  Gowron is an important character moving forward, for both Next Gen and Deep Space Nine.
Acting Notes
Robert O'Reilly (Gowron) was born March 25, 1950 in New York City.  His long association with Star Trek - mostly as Gowron but a few other roles, too - has been his highest profile work.  The eye thing helped him get the part!
Other credits include the Jim Carrey film The Mask and guest appearances on Cheers, Knight Rider and MacGyver.  He and his wife have triplet sons.
I am generally disdainful of meme culture but these are too good not to share: 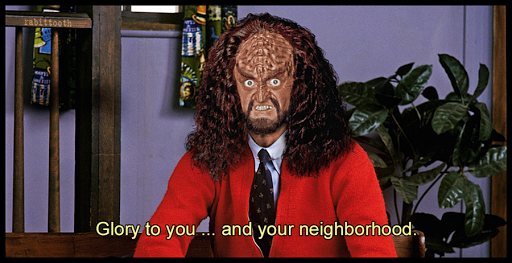 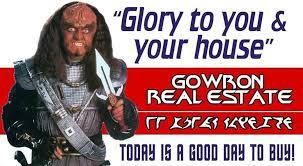 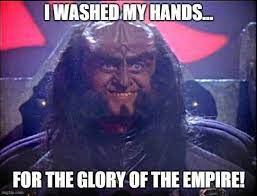