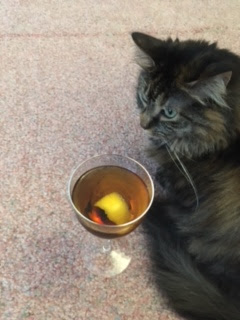 A Bijou Cocktail combines gin, green Chartreuse, sweet vermouth and orange bitters with lemon peel and Maraschino cherry as optional garnishes.  I got my recipe from The New York Bartender's Guide.  The Bijou was invented by Harry Johnson, a legendary bartender of the late 19th, early 20th centuries.  Bijou means jewel in French.  The three liquors are each meant to represent a different jewel: gin for diamond, vermouth for ruby and Chartreuse for emerald.
My wife commented that the drink looks like a lighter Manhattan.  The flavor, though, is quite different.  Predictably, the Chartreuse dominates, though there's enough of the vermouth to emphasize cinnamon hints.
Bitters of the Month
Per Runamok's suggestion to try their Maple Floral bitters in a gin based drink, I added three dashes to my current Bronx Cocktail recipe.  The result was a spicy orange flavor, particularly brown spices like cinnamon and cloves.  The bitters helped to bind the gin and the orange together, supplying a dimension the orange often lacks on its own.  We both agreed that the addition improved the drink.
Tally a win for Runamok!
Posted by The Armchair Squid at 1:00 AM