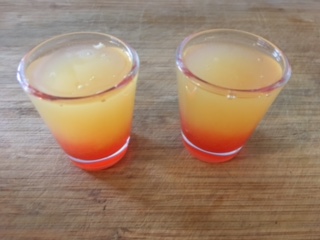 The Red Baron is a shot combining vodka, orange juice and grenadine.  It is named for Manfred von Richtofen, also known as the Red Baron, a German fighter pilot in World War I, the very one Snoopy is always trying to shoot down in the Peanuts comics.  Visually, it is a Tequila Sunrise in miniature.  I got my recipe from The Architecture of the Shot by Paul Knorr.
The result is quite pretty.  My wife tasted mostly vodka.  She tasted the other ingredients but didn't feel they had a forward role.  I didn't have that problem, though that may have more to do with our preferred consumption techniques.  I take the down-in-one approach whereas she, a reluctant participant in this shot business, tends to sip.  Mixing properly isn't necessary my way.  It probably is with hers.
Posted by The Armchair Squid at 1:00 AM